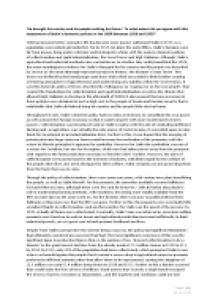 He brought his country and his people nothing but harm. To what extent do you agree with this assessment of Stalins domestic policies in the USSR between 1929 and 1953?

﻿?He brought his country and his people nothing but harm.? To what extent do you agree with this assessment of Stalin?s domestic policies in the USSR between 1929 and 1953? ?Life has become better comrades; life has become more joyous? addressed Stalin in 1935, to a population overworked and underfed. For by 1935, let alone the early fifties, Stalin?s Russians were far from joyous, living under a dictator and his despotic whims with the austere domestic policies of collectivisation and rapid industrialisation, the Great Terror and High Stalinism. Although Stalin?s agricultural and industrial methods raise contention as to whether they really benefitted the USSR, the most unambiguous evidence for Stalin?s disregard for his country and his people was described by Service as ?the most thorough repressive project in history?; the dictator?s Great Terror. This terror was defined by the brutal purges and show trials which succeeded in little besides creating a festering atmosphere of apprehension and undermining any stability within the Soviet Union. It was this domestic policy of terror, described by Volkogonov as ?waging war on his own people?, that created the foundations for collectivisation and rapid industrialisation as well as the climate that allowed High Stalinism to develop in the aftermath of WWII. It also ensured that any successes in these policies were obtained at such a high cost to the people of Russia and Russian security that is indubitable that Stalin did indeed bring his country and his people little else but harm. Throughout his rule, Stalin?s domestic policy had two aims at its heart, to consolidate his own power as well as boost the Russian economy so that it could compete with more modernised western powers. Collectivisation was introduced early in Stalin?s regime with the aim of combating inefficient farming and, as agriculture was virtually the only source of Soviet income, it was relied upon to raise funds for investment in an industrialisation drive. ...read more.

Nevertheless, the Soviet Economy was kick-started as a result, with impressive growth in certain sectors and substantial achievements such as reaching an export level of 70 million tonnes of pig iron by 1937. Electricity generation trebled in the first Five Year Plan and went on to rapidly expand in the second Plan as well, which then had a knock-on effect in other industrial areas using this source of power. The total employed labour force, which had dwindled for years under poor economic circumstances, went from 11.3 million under the NEP to 22.8 million during the first Five Year Plan. Another success of the rapid industrialisation, albeit short-lived, was the propaganda success portraying industrialisation as defining a new period in Russian history, which was characterised by the emergence of the Stakhanovite movement. Following the well-documented efficiency of coalminer Alexei Stakhanovich, millions of workers were inspired to follow his example and dedicate themselves fully to aiding this industrial growth; J Schott describes this phenomenon as ?each believed this was making history and that he personally had a part to play?. The extent to which Stalin?s pursuance of industrialisation benefitted Russia takes on an altogether more important facet in the opinion of historians such as Lee who conclude that ?heavy industrialisation translated into ultimate survival? during WWII. This therefore evidences that through industrialisation, despite it not being a well thought out policy, Stalin?s aim of protecting his own dictatorship was successful; ?his gamble was paying off for him,? according to Service, ?albeit not for his millions of victims?. The limitations of industrialisation was acutely felt by these millions of victims, the Russian people, due to the fact that with increased employment in the cities, there was increased demand for public services, food and particularly living space. Yet because none of these were a priority to maintain they became decrepit and the people suffered, to the extent that in Magnitorsk, one of Stalin?s best examples of his successful industrial drive, 20% of the population were living in mud huts. ...read more.

Anti-Semitism was prevalent in society with Stalin referring to Jewish people as ?rootless cosmopolitans?, as well as 2 million members of National minorities deported and a further half a million killed. The strict censorship laws ensured that anything foreign, be it in the form of radio broadcasts, literature or international travel was banned; Stalin?s paranoia about the threat from the west was evident from his instruction to citizens to be on guard against ?hidden agents of western imperialism?. The fact that Stalin subjected his people to such terror displays how he had ?unmistakably become the country?s despot? according to Service and did indeed bring them little else but harm. The harm High Stalinism caused to the Russian people is clear from the extensive reliance on the gulags to keep the economy afloat; slave labour became an economic essential rather than just the basis. Thus it is evident that even by 1953 the significant economic failings of collectivisation and rapid industrialisation were apparent because an increased level of terror was needed to maintain them, and the cost of human life overwhelmed any successes they may have had. From his securing of power in 1929 until his death in 1953, Stalin was constantly preoccupied with two issues, neither of which prioritised the welfare of his people; seeing Russia catch up with the west in terms of industry and modernisation, and the further consolidation of his own power, with the latter taking supreme importance in the final decade of his rule. Although with almost instantaneous impact on the Russian economy, Stalin?s domestic policies ultimately failed as a result of the lack of adequate economic and social planning behind them, and Stalin?s lack of foresight ensuing that he, according to Figes, ?had caused through his policies abuses and chaos?, ultimately undermining the security and success of the USSR at the expense of the people themselves, and causing his country and his people little else but hardship and suffering. Ciara Lally 01.06.2010 ...read more.