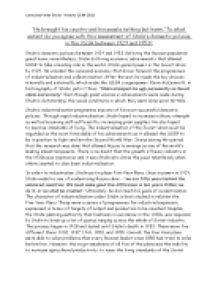 He brought his country and his people nothing but harm. To what extent do you agree with this assessment of Stalins domestic policies in the USSR between 1929 and 1953?

﻿Lereculey Peran Enora History 19.04.2012 ?He brought his country and his people nothing but harm.? To what extent do you agree with this assessment of Stalin?s domestic policies in the USSR between 1929 and 1953? Stalin?s domestic policies between 1929 and 1953 did bring the Russian population great harm; nevertheless, Stalin did bring economic achievements that allowed USSR to take a leading role in the world. Stalin gained power in the Soviet Union by 1929. He created the command economy that drove forward the programmes of industrialisation and collectivisation. After the war, he made the key choices internally and externally, which made the USSR a superpower. Kevin McDermott, in his biography of Stalin, puts it thus: ?Stalin stamped his ugly personality on Soviet state and society?. Even though great economic achievements were made during Stalin?s dictatorship, the social conditions in which they were done were terrible. Stalin?s industrialisation programme was one of his most successful domestic policies. Through rapid industrialisation, Stalin hoped to increase military strength as well as becoming self-sufficient by increasing grain supplies. He also hoped to improve standards of living. ...read more.

Agriculture did become more mechanised but not enough resources were devoted to this sector. Stalin was never very interested in the well-being of the peasants and made no real attempts to provide them with incentives. This was particularly evident after the war and resulted in disastrous levels of production, which worried other Soviet leaders. Stalin saddled the USSR with an inefficient agricultural system. Indeed, it could be argued that the failure of the collectivisation programme brought more harm than good to the Russian people. Against any of Stalin?s achievements has to be set the dark side of Stalin?s Russia. The terror that reigned over Russia during Stalin?s dictatorship brought an incredible level of harm to the Russian people. Josef Stalin probably wielded more power than any other tyrant in history. He ruled be means of terror and through a government apparatus that he dominated. He tolerated no threat to his power, real or imaginary, and his leadership was unquestioned. Lust for power, personality defects and paranoia are important in explaining Stalin?s brutal actions and personal politics but he was also motivated by ideas. ...read more.

Training courses meant they could improve their qualifications and position, pay and prospects. In conclusion, Stalin brought harm to his people but he also brought achievements. The extent to which the quote ?he brought his country and his people nothing but harm? seems quite extreme: Stalin?s achievements allowed Russia to take a leading role in world relations. It is true that the deaths of over 20 million Soviet citizens in the forced collectivisation programme of the 1930s (which created the famine in 1932) and the Great Terror of the late 1930s is the best example to show that he did bring much harm. However, the Great Terror was also the policy which brought all the domestic policies together and allowed Russia to modernise to become one of the leading countries. Furthermore, the main claim for Stalinist achievement is the transformation of the USSR into a modern state with industry capable of providing the armaments that enabled the USSR to defeat Germany in the Second World War. Nevertheless, barely 60 years after the dictator?s death, I think it is too early to make an objective assessment of his legacy to the Russian people. John Keep believes so as he wrote ?In the mid-1990s, the defects of the Stalinist regime looms larger than its successes. The perspective may change in decades to come.? ...read more.