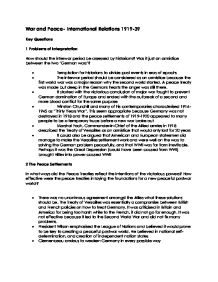 War and Peace- International Relations 1919-39 Key Questions 1 Problems of Interpretation How should the interwar period be assessed by historians? Was it just an armistice between the two 'German wars'? * Temptation for historians to divide past events in eras of epochs * The interwar period should be considered as an armistice because the first world war was a major reason why the second world started. A peace treaty was made but deep in the Germans hearts the anger was still there. * It started with the victorious conclusion of major war fought to prevent German domination of Europe and ended with the outbreak of a second and more blood conflict for the same purpose * Winston Churchill and many of his contemporaries characterised 1914-1945 as "Thirty Years War". This seem appropriate because Germany was not destroyed in 1918 and the peace settlements of 1919-1920 appeared to many people to be a temporary truce before a new war broke out * Marshal Foch, Commander-in-Chief of the Allied armies in 1918 described the Treaty of Versailles as an armistice that would only last for 20 years * ...read more.

How effectively were the treaties enforced? The economic depression The American Senate refuse to accept principle of American involvement in the League. Its failure to ratify the Treaty of Versailles ensured that all plans for an Anglo-American guarantee of France were abandoned. Leaving Britain and France to enforce peace with its' fundamentally different approaches Arguments over: reparation payments, disarmament; the implementation of the Treaty in Eastern Europe, particularly in Upper Silesia Anglo-French disagreements over Germany started when French, on the pretext of late German reparation deliveries in coal and timber, occupied the Ruhr. Their intention was not only to force Germany to honour its reparation obligations but also to split off the Rhineland from Germany by creating a French satellite state there. Britain adopted "benevolent passivity" policy and refused to cooperate with the French, in early 1924 it became clear that French policy was failing and that Britain together with USA was able to bring Ruhr conflict to an end by convincing both France and Germany to accept the Dawes Plan Problems with carrying out the Treaty of S�vres with Turkey because it was an Anglo-French compromise. ...read more.

The Allied Disarmament Commission was withdrawn from Germany. The total sum of reparations that Germany had to pay was cut and the British and French agreed to pull out completely from Rhineland 5 years earlier than they were committed to do by Treaty of Versailles The USA did abandon its policy of isolation a bit when they decided to formulate the Dawes Plan and join the League of Nation's Preparatory Commission set up to prepare for the World Disarmament conference, but they did keep their word in the end when the Senate refuses membership to the League of Nations 5 The League of Nations How did the League work and how successful was it? 6 The Consequences of the Great Depression What was the impact of the Great Depression on internationals politics? 7 The Collapse of the League and the Weakening of the Versailles System Why was the League unable to stop the aggressive policies of Japan and Italy, 1931-6? Why were Britain and France unable to stop Hitler from breaking key clauses of the Treaty of Versailles? 8 The Outbreak of the Second World War? What were the causes of the Second World War? Why did the policy of appeasement fail? ...read more.