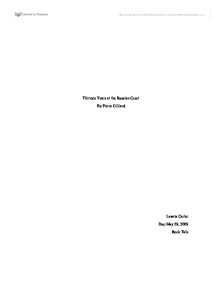 Thirteen Years at the Russian Court By Pierre Gilliard Lavota Carter Due May 29, 2009 Book Talk Introduction Thirteen Years at the Russian Court by Pierre Gilliard is an educational yet entertaining memoir. Pierre Gilliard enlightens the reader on some intimate moments with the Tsar and his family. The book is set from 1905 to 1920. That is from when he joined the Russian Court to when the Royal Imperial relics are found. Even though, his service in the Court went from 1905 to 1918. The author tells of his travels with the royal family, their differential personalities, and the background to most of the Tsar's decisions. Well-known events in this time period such as the Bloody Sunday, Rasputin's ascent to Court, the First World War, and Revolution of 1917 are explained as best of his ability. Background Pierre Gillard, a Swiss citizen was the French tutor to the children of the Tsar and Tsarina of Russia. The inspiration for writing this record was to refute the misleading and false books he discovered upon his return to Western Europe. In the introduction he explains that he was appalled at the artificial stories that arose in the clamor for juicy information on the Russian Imperial family. One of them that he read even said that he, himself, was dead. Because of that, he took on the task of writing his memoir to give the public the real deal. ...read more.

The Tsarina's consequent activity as a stand-in for Nicholas II in court is also talked about. The rest of the book until 1916 gives detail of the Tsar and his son's travels on the front. The book goes on to say that the struggles that Nicholas II had trying to keep his monarchy were a plot by the Germans to sink Russia. Since Russia had stuck to her allies without any sign of discontent there was only one thing for them to do. That was to dethrone the monarchy. Tsar Nicholas II was the glue that kept different government factions together, and without him it would ultimately fall on its knees. They started attacking any angle they could with rumors and falsehoods. The favorite and most effective were attacks against the Tsarina. The two things that counted in opposition to her is the relationship between herself and Rasputin, and the fact that she was German, a foreigner. Thus, making her look like an untrustworthy traitorous woman. It did not help matters that the relationship between the Duma and its Tsar was on thin ice at present. Then the staretz, Rasputin is murdered and his body is found December 31st and the whole family is devastated, especially the Tsarina. The revolution and following abdication of the Tsar is next. Gilliard tells the reader about the inner struggle that Nicholas II had in his decision to leave Tsarsko�e- Selo, which was the Imperial family's favorite residence, the front again. ...read more.

Gilliard is very convincing in his tale of misunderstood monarchs. However, his relationship that he had with his charges and their parents is a double-edged sword, because it would leave some doubt that the narrative is bias. That is not the case here. Pierre Gilliard, in his intro, denounces any say of hearsay in his publication. The work, he states, was and has been written with a cool and calm mind and is a straight retelling of his experiences in the Russian court. The memoir provides a brilliant understanding to the questions of "why" when it comes to the decisions of the Tsar. Before this work was written the answers were unattainable, because of the Imperial family's strict sense of privacy. Much effort that was obviously put into this account is well received. Recommendation I would recommend this book to middle school age students and up, if it is to be used for research purposes. The book's easy-reading style and author notes make it understandable at the age of 11 or 12 at the least. Otherwise this memoir should be read if the individual has an interest in the last Tsar and his family's fall to ruin or Russian history in general. I would advocate this book to the occasional reader as well, because they will not be able to help being captivated by the record's warm familiar nature. Basically this book is for anyone that wants a good quick read. ...read more.