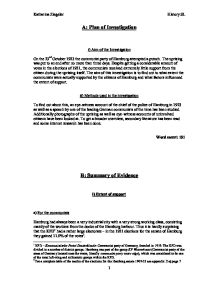 A: Plan of Investigation i) Aim of the Investigation On the 23rd October 1923 the communist party of Hamburg attempted a putsch. The uprising was put to an end after no more than three days. Despite getting a considerable amount of votes in the elections of 1921, the communists received extremely little support from the citizen during the uprising itself. The aim of this investigation is to find out to what extent the communists were actually supported by the citizens of Hamburg and what factors influenced the extent of support. ii) Methods used in the investigation To find out about this, an eye-witness account of the chief of the police of Hamburg in 1923 as well as a speech by one of the leading German communists of the time has been studied. Additionally photographs of the uprising as well as eye-witness accounts of uninvolved citizens have been looked at. To get a broader overview, secondary literature has been read and some internet research has been done. Word count: 151 B: Summary of Evidence i) Extent of support a) For the communists Hamburg had always been a very industrial city with a very strong working class, consisting mainly of the workers from the docks of the Hamburg harbour. Thus it is hardly surprising that the KPD1 had a rather large electorate - in the 1921 elections for the senate of Hamburg they gained 11.0% of the votes2. The head of the KPD of Hamburg, Ernst Th�lmann3 described the uprising as a glorious fight of the united workers against the class enemy, which was strongly supported by the workers - 'Hundreds of workers built barricades in the streets. ...read more.

Therefore the use of Th�lmann's account for anyone trying to reconstruct the events of the uprising is very limited. It is of great value however, for anyone studying how German communists in later years (especially in the DDR) used the events of the uprising in Hamburg for their propaganda. Word count: 454 D: Analysis The first aspect to be analysed has to be the actual extent of support for the communists. The accounts discussed earlier draw very different pictures of the events of the uprising of October 1923. Where Ernst Th�lmann describes a heroic fight of a united working class, which can partly be supported by photographic evidence, other sources speak of the isolated fight of a small minority of left extremists. The truth most probably lies somewhere in between these two opposing positions. Fact is that at least some parts of the population helped the communists. This support from the population however was limited to certain districts of Hamburg - namely Barmbek18 and Schiffbek, where support for the communists was traditionally strongest. In other districts of Hamburg there was very little support, which, according to Danner, was at least partly forced. On top of that, the Vereinigung Republik, a social democratic group of workers, who had joined the group voluntarily, fought against the communists, which shows that there was no general support for the cause of the communists among the workers, but only support from certain extremist parts of the working class. There were two main reasons for the lack of support for the communists - the lack of communication and organisation amongst the communists and the generally moderate political climate in the working class of Hamburg. ...read more.