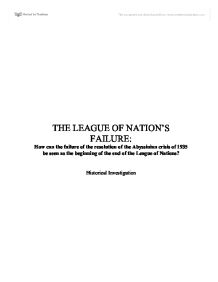 D. Analysis The Abyssinian Crisis occurred because the pride of Italy was hurt when it was defeated by Ethiopia at the Battle of Adowa. Italy's accusation of Ethiopia on aggression of Wal Wal might be intentional to make an excuse of breaking the treaty and attacking Ethiopia and regain its lost pride. Britain and France did not want to provoke Italy because they were afraid of wars. In private, Hoare wanted to negotiate with Mussolini to stop wars; however, he wanted to satisfy the public opinion of Britain that supported collective security. The speech that Samuel made to the League in 1935 shows that he tried to satisfy the Britain by making a statement to support the collective security fully. It was more likely for Hoare to turn down the Hoare-Laval Plan because he needed popularity for his election year. The fact that the two major European power of the LON tried to negotiate with the Mussolini, the aggressor of the crisis, was the biggest factor that made the LON to lose its credibility drastically. Donald Birn, a historian, argues that to follow the LON's aim of collective security, all the countries should have expected a risk of war with Italy to protect Abyssinia. He criticized the LON and stated that the existence of LON is meaningless if the collective security cannot be followed by the other countries, especially the leading powers.23 The LON should have expected a war and support the weaker countries that are being oppressed to prevent wars. ...read more.