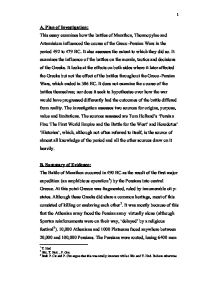 A. Plan of Investigation: This essay examines how the battles of Marathon, Thermopylae and Artemisium influenced the course of the Greco-Persian Wars in the period 492 to 479 BC. It also assesses the extent to which they did so. It examines the influence of the battles on the morale, tactics and decisions of the Greeks. It looks at the effects on both sides where it later affected the Greeks but not the effect of the battles throughout the Greco-Persian Wars, which ended in 386 BC. It does not examine the course of the battles themselves; nor does it seek to hypothesise over how the war would have progressed differently had the outcomes of the battle differed from reality. The investigation assesses two sources for origins, purpose, value and limitations. The sources assessed are Tom Holland's 'Persian Fire: The First World Empire and the Battle for the West' and Herodotus' 'Histories', which, although not often referred to itself, is the source of almost all knowledge of the period and all the other sources draw on it heavily. B. Summary of Evidence: The Battle of Marathon occurred in 490 BC as the result of the first major expedition (an amphibious operation1) by the Persians into central Greece. At this point Greece was fragmented, ruled by innumerable city-states. Although these Greeks did share a common heritage, most of this consisted of killing or enslaving each other2. ...read more.

C. Evaluation of Sources: The book 'Persian Fire: The First World Empire and the Battle for the West' was first published in 2005 and was written by Tom Holland who is a British historian. He wrote the book in order to inform the general public of the war which, in the words of John Stuart Mill, 'even as an event in English history, is more important than the battle of Hastings'13. It is not an academic account, and it is not fully referenced and where there are opposing views he rarely details his decision to choose a particular side. He is very well informed about the period yet at times makes assumptions which may not be justified. It is a valuable source as it covers the whole period and explores in depth the effects of not just the battles being assessed but also economic and cultural factors. It is clearly well researched, yet the subject is so controversial among historians of the period that he would be unable to fulfil his purpose whilst explaining his views in every single controversial area so at times he makes assumptions which could at times be a limitation. A more obvious limitation of the source is that it was written nearly two and a half thousand years after the period discussed, so there is little evidence as to the events of the war - much that is presented as fact is more of an informed estimate. ...read more.

directly, leading to their tactics of securing the support of Greek traitors and using flanking attacks - tactics which nearly conquered the Greeks. E. Conclusion: The Greco-Persian wars are a period of much controversy, with many statistics and events being fiercely debated. Marathon, occurring 10 years previously to the other battles examined, was a great victory and gave the Hellenic League - the Greek coalition - the hope that they could successfully resist. However, it did lead to problems in Athens, as it created over-confidence to the extent of arrogance in the Athenians. The Battle of Thermopylae has come to symbolise the clash between the Persian Empire and Greece. However, it appears to me that The Battle of Thermopylae had little relative worth: the Spartans and their allies failed, understandably, to hold the pass for a significant length of time and the battle led to no development of tactics - except perhaps on the Persian side. However, it did have some morale value and it is unlikely that the fleet would have remained stationed off Artemisium were it not for the holding force at Thermopylae. In contrast, Artemisium was of no propaganda value and was intended, tactically, merely to prevent the Persians from surrounding Thermopylae through an amphibious operation and yet it led to the development of the tactics which defeated the Persians. Therefore, it is my conclusion that The Battle of Artemisium was of the greatest value and that The Battle of Thermopylae, whilst famous, was the least. F. ...read more.