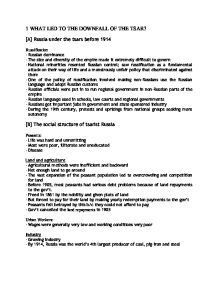 1 WHAT LED TO THE DOWNFALL OF THE TSAR? [A] Russia under the tsars before 1914 Russification - Russian dominance - The size and diversity of the empire made it extremely difficult to govern - National minorities resented Russian control; saw russification as a fundamental attack on their way of life and a monstrously unfair policy that discriminated against them - One of the policy of russification involved making non-Russians use the Russian language and adopt Russian customs - Russian officials were put in to run regional government in non-Russian parts of the empire - Russian language used in schools, law courts and regional governments - Russians got important jobs in government and state-sponsored industry - During the 19th century, protests and uprisings from national groups seeking more autonomy [B] The social structure of tsarist Russia Peasants: - Life was hard and unremitting - Most were poor, illiterate and uneducated - Disease Land and agriculture - Agricultural methods were inefficient and backward - Not enough land to go around - The vast expansion of the peasant population led to overcrowding and competition for land - Before 1905, most peasants had serious debt problems because of land repayments to the gov't. - Freed in 1861 by the nobility and given plots of land - But forced to pay for their land by making yearly redemption payments to the gov't - Peasants felt betrayed by this b/c they could not afford to pay - Gov't cancelled the land repayments in 1905 Urban Workers: - Wages were generally very low and working conditions very poor Industry - Growing industry - By 1914, Russia was the world's 4th largest producer of coal, pig-iron and steel [C] How was Russia governed under the tsars? - Tsarist Russia was an autocracy - The tsar had an imperial council to advise him and a cabinet of ministers who ran the various gov't departments; they reported to him directly - The tsar was the pivot on which the system rested - ...read more.

The SRs also attracted intellectuals who wanted to make contact with the mass of the population The Social Democrats - In the 1880s, it seemed to some Russian intellectuals that there was no hope of a revolutionary mvmt developing amongst the peasantry. Instead they turned to the latest theories of a German philosopher, Karl Marx. Marxism, an optimistic theory in which there was progress through the development of industry and the working class to the ultimate triumph of socialism - In 1898, Marxists formed the Russian Social Democratic Labour Party but it split into two factions at the Second Party Congress in 1903- the Bolsheviks (Majoritarians) and the Mensheviks (Minoritarians); the split was caused by the abrasive personality of Lenin, who was determined to see his notion of the revolutionary party triumph. Main beliefs: Both factions accepted the main tenets of Marxism, but they split over the role of the party Support: Came mainly from the working class. The Bolsheviks tended to attract younger, more militant peasant workers who liked the discipline, firm leadership and simple slogans. The Mensheviks tended to attract different types of workers and members, especially Jews and Georgians Bolsheviks- Lenin believed that a revolutionary party should: � Be made up of a small number of highly disciplined professional revolutionaries � Operate under centralized leadership � Have a system of small cells (3 ppl) to make it less essay for the police to infiltrate them It was the job of the party to bring socialist consciousness to the workers and lead them through the revolution. Critics warned that a centralized party like this would lead to dictatorship Mensheviks (w/ the provisional gov't)- They believed that the party should: � Be broadly based and take in all those who wished to join � Be more democratic, allowing its members to have a say in policy-making � Encourage trade unions to help the working class improve their conditions It took the Marxist line that there would be a long period of bourgeois democratic ...read more.

chairmen who were ignored - Committees of Public Organizations (multi- or non-party bodies run by middle-class zemstvo members) were set up, but membership rapidly expanded to take in representatives of various workers', soldiers', trade union and other popular committees - As news of the revolution spread, peasants also started to set up committees and give voice to their opinions and demands - The PM, lvov, more radical and populist, encouraged localities to run their own affairs - The main issue causing problems was war WHO TOOK CONTROL OF RUSSIA AFTER THE FEB. REVOLUTION? 1) The downfall of the Tsar had been swift b/c there was very little support left for him in any section of society 2) The Feb. Rev. Seems to have been a spontaneous and popular rev. With little involvement from revolutionary leaders 3) A prov. Gov't was formed by liberal politicians to rule Russia during a transition period until a Constituent Assembly could set up a new system of gov't 4) The Prov. Gov't had little power in Petrograd 5) The power lay with a rival body - the Soviet - formed at the same time 6) The Soviet, led by socialist intellectuals, represented workers and soldiers. It controlled the armed forces, industries and services in the capital 7) The Soviet could have taken control but had several reasons for not doing so and for co-operating with the Prov. Gov't. In particular, the Soviet leaders did not want a civil war to break out 8) Things seemed to start well, as the Prov. Gov't announced elections and civil rights for the Russian ppl 9) In the rest of Russia, all sorts of bodies were set up to run local gov't. The soviets were the most important of these bodies. They were simply councils or committees run by local ppl, non-party socialists. Mensheviks and Socialist Revolutionaries, pretty much outside of anybody else's control 10) Things did not immediately get better after the revolution. The war was still going on and food and fuel were still in short supply ?? ?? ?? ?? ...read more.