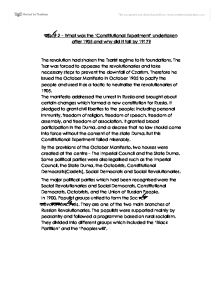 Essay 2 - What was the 'Constitutional Experiment' undertaken after 1905 and why did it fail by 1917? The revolution had shaken the Tsarist regime to its foundations. The Tsar was forced to appease the revolutionaries and take necessary steps to prevent the downfall of Czarism. Therefore he issued the October Manifesto in October 1905 to pacify the people and used it as a tactic to neutralise the revolutionaries of 1905. The manifesto addressed the unrest in Russia and brought about certain changes which formed a new constitution for Russia. It pledged to grant civil liberties to the people: including personal immunity, freedom of religion, freedom of speech, freedom of assembly, and freedom of association. It granted broad participation in the Duma, and a decree that no law should come into force without the consent of the state Duma. But this Constitutional Experiment failed miserably. By the provisions of the October Manifesto, two houses were created at the centre - The Imperial Council and the State Duma. ...read more.

There were 4 Dumas which were recognised throughout the course of the Constitutional Experiment. The first Duma operated in 1906, the second Duma operated in 1907. The third Duma from 1907-1912, and the fourth and last Duma lasted from 1912 - 1917, just before the beginning of the 1st World War. All four Dumas were dissolved for questioning government policy, and the obstructive policy of the Tsar led to their closing and frustration of their members. The constitutional experiment failed due to three main reasons. First, the obstructive policy of the Tsar; second, the frustration of the members of the Duma; and lastly, the effect of military defeat. After the revolution, the Tsar issued the October Manifesto, which was a precursor of the first ever Russian Constitution. The manifesto and the constitution resulted in insignificant democratization as the Tsar continued to exercise veto power over the Duma, which he dissolved and reformed several times. ...read more.

This increased the resentment of the Duma to a large extent, and since the Provisional Government did not pay much attention to the urgent land reforms and establishment of a constituent assembly as they were too determined to win the war, this paved the way for the Revolution in 1917 and eventually the Tsar was forced to abdicate. The failure of the Constitutional Experiment was more or less predictable, given the behaviour and actions of the Tsar. The wrong-doings of the Tsar was bound to provoke the people who were actually interested in giving the Duma a meaningful role and saving the constitution. And it was the Duma eventually that ended the Experiment. Therefore the first two factors were a major reason for the failure, and the third factor only accompanied the other two and acted as a catalyst. If the Tsar had succeeded in gaining victory in the War, he would have been easily able to override the Duma, but his defeat enabled the Duma to take power and force the Tsar to abdicate. ...read more.