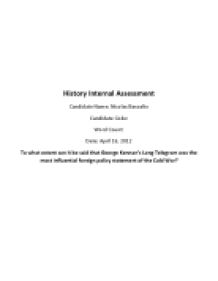 ﻿History Internal Assessment Candidate Name: Nicolas Basoalto Candidate Code: Word Count: Date: April 16, 2012 To what extent can it be said that George Kennan?s Long Telegram was the most influential foreign policy statement of the Cold War? Contents Plan of Investigation Summary of Evidence The Post-World War II Scenario The Long Telegram Influencing the Truman Doctrine The Origins of the Marshall Plan Evaluation of Sources Analysis Conclusion Bibliography To examine how George Kennan?s Long Telegram influenced the United States? approach to relationships with the USSR between 1946 and 1950. Plan of Investigation This investigation will determine in what ways George Kennan?s Long Telegram, which was sent to U.S. Secretary of State James Byrnes and later published in the influential magazine Foreign Affairs, influenced the United States? approach to its relationships with the USSR until its collapse in 1991. The purpose of this investigation is not to address whether the methods proposed by the Long Telegram were effective in dealing with US-USSR relationships. Instead, it is to determine what part did George F. Kennan and his Policy Planning Staff play in the forging of the United States? foreign policy between the years of the Long Telegram, 1946, until the break out of the Korean War in 1950. ...read more.

Kennan believed that the expansion of the Soviet Union?s sphere of influence was the greatest threat to the western world, and the only way to stop the Soviet Union from creating a powerful sphere of influence over the world was with containment. Kennan observed that ?soviet power, unlike that of Hitlerite Germany, is neither schematic nor adventuristic? It does not take unnecessary risks. Is impervious to logic of reason, and it is highly sensitive to logic of force,? meaning that the Soviet Union would not take the risk of going to war with the west for the sake of expanding. However, to achieve this, the west would have to impose their weapon superiority instead of their ?logic of reason? to tell the Soviets to stop expanding. The Origins of the Marshall Plan The Long Telegram was the ideological foundation of the Marshall Plan, officially the European Recovery Program, which was an aid program designed to ?rehabilitate the economies of European countries in order to create a stable conditions in which democratic institutions could survive.? This idea of aiding Europe reconstruct post-WWII is explained in the Long Telegram as something that would be crucial to prevent the spread of ?world communism,? which resembles a ?malignant parasite which feeds only on diseased tissue.? Evaluation of Sources Wilson D. ...read more.

?For this reason, the Soviet Union can easily withdraw--and usually does when strong resistance is encountered at any point. Thus, if the adversary has sufficient force and makes clear his readiness to use it, he rarely has to do so.? Kennan states that the key to stopping communism from spilling from the Soviet Union into the devastated European continent was to ?formulate and put forward for other nations a much more positive and constructive picture of sort of world we (the US) would like to see than we have put forward in the past. It is not enough to urge people to develop political processes similar to our own? they are seeking guidance rather than responsibilities. We should be better able than Russians to give them this. And unless we do, Russians certainly will.? Conclusion In conclusion, the Long Telegram was the most influential factor in the United States policy making during the beginning of the Cold War. It was the first classified document that was widely spread to the public and gained public as well as governmental approval. The Long Telegram was the strategic basis for the Truman Doctrine, as Kennan is known as the ?the father of containment.? Furthermore, it was the ideological foundation of the Marshall Plan, since Kennan firmly believed that the United States? should play an important role in European Rehabilitation to stop ?world communism.? ...read more.