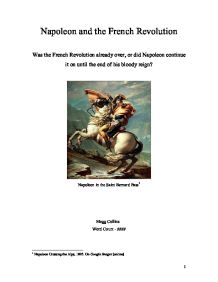 As well, the alternate viewpoints of the British are helpful in understanding the French Revolution from the viewpoint of an outsider. It is obvious to draw clear bias from the novel, as it is written by a British, and the audience of the novel would have been British. In such a case, the novel would then contain exaggerations to offend the French. Burke had indeed supported the American Revolution because he had believed in what the Americans were fighting for, however in his reflections, he writes of his disagreement with the French Revolution because he doesn't believe in what the French are fighting for. He viewed the revolution as a bloody rebellion against proper traditions and authorities, which coincide with his very conservative lifestyle. History of the French Revolution This source is another academic novel written by the famous French historian Francois Mignet, and it is also a primary source document. This is definitely a very valuable resource as it was written by a Frenchman, and would contain the viewpoints of a historian caught in a social and political revolution. Mignet was also born into a bourgeois family, and it's very important to get fundamental knowledge on the largest population in France at the time. Mignet was also a supporter of the French revolution, and therefore having a source that is for the revolution provides positive feedback. One of the best qualities of this work is the witty tone in which it is written. ...read more.

Napoleon also seems to be a model for future dictators of the time, the most well known being Hitler who similarly wished to rule the world, and who thought his country was the best. Both Hitler and Napoleon were fearless going into war, which probably was what ended them. Section E - Conclusion In a sense Napoleon's reign may have not been a continuation of the French Revolution. The people of France wanted to rule themselves, and Napoleon took the National Assembly by storm proclaiming himself emperor of France. He also issued strict control over the media. However as a macrocosm, Napoleon's reign was definitely part of the French Revolution. The original government was overthrown, as was the next. Napoleon may have had the most stable government for the time period but he also constituted the Napoleonic Civil Code, and many national policies to help his rule including religious tolerance. His foreign policies were horrific however, and he fought with all the major powers to increase the amassed French land, and to increase nationalistic pride in his people. His battles instigated the beginning of revolutions in all of the major powers of Europe including Austria, Germany, Italy, and Greece. Therefore it is my belief that Napoleon's reign was a continuation of the French Revolution not only because he was eventually one of the many governments that were overthrown in that era, but because he constituted the Civil Code, increased the overall French land, and he increased the pride of French people. As well he instigated the commencement of a series of revolutions in 1848, and the need for nationalistic pride. ...read more.