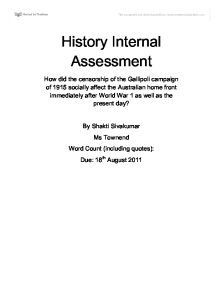 Furthermore, the source also goes on to state that the Australian public often had a sense of pride for their "great diggers" (p339). Australia During the War by Ernest Scott in 1919 and was published by Angus and Robertson in Melbourne. This is a secondary source, due to it being written outside of the areas in which the book covers. Furthermore, the source also states that in an article about the torpedoing of the ship Southland by C.E.W Bean who was the official Australian war correspondent was strictly censored by the Australian censor, Captain William Maxwell. The source also goes on to state that Bean's approach at writing articles significantly changed over time and that due to his content being significantly censored, he changed his writing habits. The source also contains the uncensored and censored articles written by Bean Criteria C - Evaluation of Sources - First source above - could actually be censored, and therefore may have invalid information - However due to it being written after the war, censorship may not be a factor - Author was the Australian war ...read more.