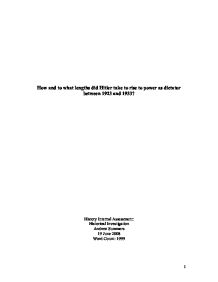 How and to what lengths did Hitler take to rise to power as dictator between 1923 and 1933? History Internal Assessment: Historical Investigation Andrew Summers 19 June 2008 Word Count: 1999 Table of Contents: Part A Plan of Investigation 3 Part B Summary of Evidence 4 Part C Evaluation of Sources 7 Part D Analysis 9 Part E Conclusion 11 Part F List of Sources 12 A. Plan of the Investigation This investigation seeks to examine and evaluate the way in which Hitler rose to power in Germany. The main body of this investigation outlines how Hitler went from a mere man, to the powerful leader of Nazi Germany. Who influenced him will be examined, specifically paying attention to what encouraged him to step into politics and later lead a great nation during World War II. One source that will be used in this essay is "How did Hitler become a dictator?" written by author Jamie Burn, including sources directly from Adolf Hitler's - Mein Kampf. The second source that will be used in this investigation is "Hitler's rise to power, 1924 - 30" by author Alan Mendum. These two sources will then be evaluated in detail in terms of their origin, purpose, value and limitations. ...read more.

It discusses the events that led to Hitler's rise to power in a consecutive order. Reading this article, it is easy to follow as it starts with Hitler's imprisonment and how Hitler began to rebuild the Nazi party once he was released from prison. The election in 1928 reveals the Nazi's popularity once the voting was cast. The Wall Street crash and the Great Depression unveils the plummet of Germany's economy and how Hitler jumped at the chance to gain authority in promising prosperity and an end to the Great Depression. This article then describes how the Nazis achieved power at the polls thoroughly planned campaigns, propaganda, "flags, uniforms, slogans and carefully choreographed parades"14 and charismatic speeches. The strong armed forces and prejudices contributed in the intimidation of voters. Lastly, the article discusses specifically how the Nazis got into power, through the downfall of the Weimar Republic and the success of the Nazi party. The article is limited, however, in that it doesn't go into detail about the events leading the rise of Hitler, nor does it show the actual passages in Mein Kampf that were analyzed. The origin of the second source is a journal article written by Alan Mendum for Hindsight 17.1 on September 2006, found on page 28. ...read more.