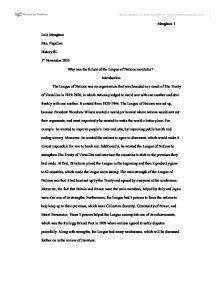 Lalit Menghani Mrs. Napolina History SL 1st November 2010 Why was the failure of the League of Nations inevitable? : Introduction The League of Nations was an organization that was founded as a result of The Treaty of Versailles in 1919-1920, in which nations pledged to avoid war with one another and deal frankly with one another. It existed from 1920-1946. The League of Nations was set up, because President Woodrow Wilson wanted a world parliament where nations would sort out their arguments; and most importantly he wanted to make the world a better place. For example: he wanted to improve people's lives and jobs, by improving public health and ending slavery. Moreover, he wanted the nations to agree to disarment, which would make it almost impossible for war to break out. Additionally, he wanted the League of Nations to strengthen The Treaty of Versailles and convince the countries to stick to the promises they had made. At first, 29 nations joined the League in the beginning and then it gradually grew to 62 countries, which made the league seem strong. The main strength of the League of Nations was that it had been set up by the Treaty and agreed by everyone at the conference. Moreover, the fact that Britain and France were the main members, helped by Italy and Japan were also one of its strengths. ...read more.

impossible for the United States, after its losses in the First World War and its disillusionment with the peace treaties, to send its forces all over the world in defense of those treaties. (Northedge 285) Furthermore, another weakness was that, the League only had two effective members of the Entente Powers, which were Britain and France, and they themselves were recovering from the First World War. Divided from the start in their conceptions of what the League was supposed to do, Britain wanting to use the League to revise the excesses of the peace treaties of 1919, France seeking to use it to defend and enforce them, the two democracies were further divided by the absence of the United States and later by the withdrawal of the totalitarian countries. (Northedge 285) Moreover, F.S. Northedge questions, "If a whole coalition of Allied and Associated Powers barely sufficed to defeat the Central Powers in 1918, how could Britain and France alone be sufficient to overcome an even larger group of revisionist states in the 1930s?" (285) The League of Nations contained' peace-loving' states which were regarded too weak to fight back against the aggressors. All that the 'peace-lovers' could do was to fight the law-breakers. Additionally, the organization did not have an army of its own to take effective action against the aggression, because of the British and British Commonwealth, who were partly blamed for this, because they went against the French proposal in ...read more.

(F.S. Northedge) Germany wished to reduce most League member states to laborers in the Nazi system. The balance of the forces between that system and the status quo was such that, stopping some major changes in Hitler's policies, a violent clash between the two cannot avoid the League's total collapse. The status quo countries led by Britain were willing to make concessions with Germany when it was strong as a country in the 1930's. The policy - 'appeasement' which Britain and France led failed when Hitler invaded Czechoslovakia. Conclusion The League of Nations did have good intentions to begin with and to say that it was a complete failure to solve the post WW1 problems would be wrong, because they had reduced much pain and sorrow after the events of World War I. The League of Nations magnificently contributed to satisfy basic human needs. However, they failed to maintain world peace because, despite its numerous ideas to ensure international peace and collective security, which failed during the time the League of Nations was active in that of the UN.. It failed to keep a standing army and could not do anything substantial to stop nations from going to war. The maintenance of peace has, on the whole, returned to traditional balance-of-power practices, which the world-wide organizations like the League were intended to supersede. The political work of the League in the field of improving international relations, with all its tragedies, came and went, as did the League itself. ...read more.