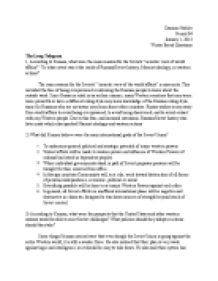 History questions on Soviet Russia and its relations with the rest of the World.

﻿Damian Niebler Period 04 January 1, 2013 Winter Break Questions The Long Telegram 1, According to Kennan, what were the main reasons for the Soviets' "neurotic view of world affairs?" To what extent was it the result of Russian/Soviet history, Marxist ideology, or western actions? The main reasons for the Soviets? ?neurotic view of the world affairs? is insecurity. This included the fear of being overpowered or allowing the Russian people to know about the outside word. Since Russia is ruled in an archaic manner, many Western countries that may seem more powerful or have a different ruling style may learn knowledge of the Russian ruling style; same for Russians who are not aware may learn about other countries. Russia wishes to say away from world affairs to avoid being overpowered, to avoid being discovered, and to avoid contact with any Western people. Due to this fear, and immoral intentions, Russian/Soviet history was later made which also sparked Marxist ideology and western actions. 2) What did Kennan believe were the main international goals of the Soviet Union? 1. To undermine general political and strategic potential of major western powers. 2. Violent efforts will be made to weaken power and influence of Western Powers of colonial backward or dependent peoples. ...read more.

Mankind may soon no longer exist because all we care about so much is power and ruling everyone. If it?s not going to be a suicide for the entire planet then it probably will go back to the way it was before, slavery. He states that there are already only 3 major powers in the world and sooner or later someone is going to want to be on top and that could led to mankind extinction and the ruling of ants or other species. The Atlantic Charter 1. What are the basic principles of the Atlantic Charter? What will result of this agreement? 1. The United States and Great Britain agreed to seek no territorial gains as a result of the outcome of World War II. 2. Any territorial adjustments would be made with the wishes of the affected people taken into consideration. 3. Self-determination was a right of all people. 4. A concerted effort would be made to lower trade barriers. 5. The importance of the advancement of social welfare and global economic cooperation were recognized as important. 6. They would work to establish freedom from fear and want. 7. The importance of freedom of the seas was stated. ...read more.

This speech had an impact that aided the outcome of the Cold War because it explained the dangers, gave some solutions and brought forth a plan of action. Marshall Plan 1. What did the Marshall Plan propose? In general the Marshall plan?s main purpose was the infusion of massive amounts of U.S. capital into Western Europe. It wasn't designed to increase military forces in Europe, it was designed to restore Europe's economy and rebuild it for solely economic reasons in order to battle Communism economically, not militarily. 1. Why do you think the Marshall plan was important in the post-WWII era? The Marshall plan was important in the post-WWIII era because most of Europe was in destruction and this would help aid the reconstruction of it while at the same time help battle Communism. 1. What do you think motivated the U.S. to adopt this plan? The United States was seen as a leader at the time, since they were part of the winner of World War II and was doing well economy wise even while the rest of Europe was in destruction. Due to this, it was believed that the United States had the responsibility to help and try to aid in the reconstruction of Europe to try and show their leadership. They were aware of the problems and they weren?t just going to stand there and watch the problem grow worse and suffer more. ...read more.