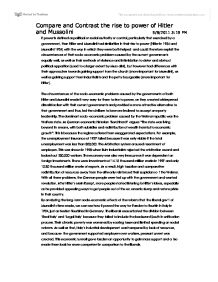 If power is defined as political or social authority or control, particularly that exercised by a government, then Hitler and Mussolini had similarities in their rise to power (Hitler in 1934 and Mussolini 1924) with the way in which they were both helped and could therefore exploit the circumstances of their socio-economic problems caused by the current governments equally well, as well as their methods of violence and intimidation to deter and obstruct political opposition (used to a larger extent by Mussolini), but however had differences with their approaches towards gaining support from the church (more important for Mussolini), as well as gaining support from industrialists and the petty bourgeoisie (more important for Hitler). The circumstances of the socio-economic problems caused by the governments of both Hitler and Mussolini made it very easy for them to rise to power, as they created widespread dissatisfaction with their current governments and provided a more attractive alternative to that government and thus, led the civilians to be more inclined to accept one party leadership. The dominant socio-economic problem caused by the Weimar republic was the Welfare state. As German economic historian 'Borchhardt' argues "The state was living beyond its means, with both subsidies and redistribution of wealth harmful to economic growth". This is because the regime suffered from exaggerated expectations. ...read more.

The Justice and Liberty leader was killed in 1973 on government instruction, and sometimes people would be assaulted by OVRA or militia simply to remind them that its best to conform. All these acts of violence and aggression made it nearly impossible for any form of opposition to get in his way of power as it intimidated a lot of opponents. In order to deter political opposition, Mussolini implemented many laws. After the Matteoti crisis, press censorship and meetings of political parties were banned in July 1924. In July 1925, the 'leggi fascistissime' was passed, banning opposition parties and Free trade Unions. All these laws ensured that opposition was prevented. The fascists also wanted to present themselves as defenders of law and order, thus gaining support from various social groups. In July 1922, he used violence to do this by limiting the strikes' effect. This impressed the conservative middle classes and convinced them that fascism could be trusted. Historian Mack Smith states "liberals allowed themselves to be convinced that only a Fascist presence in the government could crush the socialists". This is further reinforced by the time a social deputy was beaten up on the floor of the chamber. This use of violence was successful because the liberals did not take a stand against the fascists. ...read more.

However, they also had a 1929 leaflet directed to small producers, traders etc... promising to get rid of "the treacherous leaders of Marxism". Using contradictory messages in their propaganda helped the Nazis gain support of these two groups and more. However, historian Brustein argues that a lot of Germans voted Nazi for their rational economic reasons. Evidence of this is shown between 1930-33 when the Nazis put forward a series of economic policies, offering a third way between Marxism and Laissez-faire capitalism. They advocated public investment in industry to boost the economy, they employed financial controls to protect those in debt and they promised Economic Autarky to put the Germans interests above those of foreigners. This can be further substantiated by the fact that 65% of Nazi party members surveyed stated that their reason for joining the Nazi party was anti-Marxism. Therefore, these policies and promises helped gain the support of both industrialists and the petty bourgeoisie. In conclusion, Mussolini and Hitler had very similar ways of rising to power. The conditions that they exploited at their time of rising to power were similar as well as their methods of violence. However, the way in which they gained support from various power groups was slightly different. I also believe that their rise in power was more intentionalist than structuralist, as it depended greatly on their manipulation skills and methods. Words: 1738 Compare and Contrast the rise to power of Hitler and Mussolini 5/8/11 3:19 PM 5/8/11 3:19 PM 5/8/11 3:19 PM ...read more.