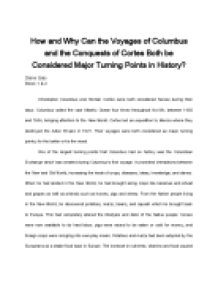 How and Why Can the Voyages of Columbus and the Conquests of Cortes Both be Considered Major Turning Points in History?

ï»¿How and Why Can the Voyages of Columbus and the Conquests of Cortes Both be Considered Major Turning Points in History? Diane Qiao Block 1 & 2 Christopher Columbus and Hernán Cortés were both considered heroes during their days. Columbus sailed the vast Atlantic Ocean four times throughout his life, between 1492 and 1504, bringing attention to the New World. Cortes led an expedition to Mexico where they destroyed the Aztec Empire in 1521. Their voyages were both considered as major turning points, for the better or for the worst. One of the largest turning points that Columbus had on history was the Columbian Exchange which was created during Columbus’s first voyage. It promoted interactions between the New and Old World, increasing the trade of crops, diseases, ideas, knowledge, and slaves. When he had landed in the New World, he had brought along crops like bananas and wheat and grapes as well as animals such as horses, pigs and sheep. ...read more.

Cortes collected incredible amounts of wealth from Tenochtitlan, the city of gold, as well as expensive jewels. In 1521, Cortes and his men had destroyed the Aztec Empire and build Mexico on the ruins of Tenochtitlan. In the past, people had thought that the world was flat and it was possible to fall off the edge of the world. Columbus believed that the world was round and that it was possible to reach Asia by sailing west. Through the voyages of Columbus, trade winds were discovered and explorers later on in history used this information during their voyages when navigating and sailing. Another huge understanding about the world was its size. Columbus had predicted the world to be much smaller than it actually was but after the voyage, he was badly mistaken. It was much easier to go out at sea knowing that they would not fall off the edge and the approximate size of the world. ...read more.

The natives had no immunity to these diseases, causing tremendous amounts of deaths. When Cortes returned in 1921 to besiege Tenochtitlan, smallpox had killed approximately one third of the Aztec population. When Columbus returned back to Spain in 1493, he brought back a disease called syphilis which spread very quickly in Europe and throughout the world. Diseases were used to the advantage of the Europeans during war because it weakened, if not, completely wiped out their enemies. The Columbian Exchange also encouraged the slave trade, and at the same time, strengthened European ethnocentrism. Slaves were brought back to Europe and sold, beaten and forced to do work. Europeans viewed these slaves as ?things?, thinking that they were better than them and that the natives needed assistance. Europeans thought of the natives as savages whose souls could only be saved by the mighty Europeans. This led to forced assimilation of the natives and millions of deaths. The voyages of Columbus and Cortes had greatly changed Europe and the New World, mainly due to the Columbian Exchange, greed for land and wealth, and religion. ...read more.