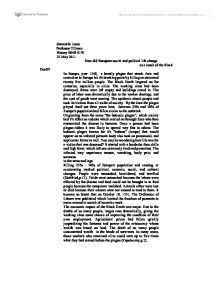 How did European social and political life change as a result of the Black Death?

Samantha Jones Professor Tillman History 004B 01W 25 May 2011 How did European social and political life change as a result of the Black Death? In Europe, year 1348, a beastly plague that struck Asia and carried on to Europe hit it's breaking point by killing an estimated twenty five million people. The Black Death lingered on for centuries, especially in cities. The working class had been destroyed, farms were left empty and buildings caved in. The price of labor rose dramatically due to the worker shortage, and the cost of goods went soaring. ...read more.

Once a person had been plague-ridden it was likely to spread very fast to others. The bubonic plague known for it's "buboes" (lumps) that would appear on an infected person's body also took on pneumonic and septicemic forms as well. You may be wondering how life was for a victim that was deseased? It started with a headache then chills and high fever, which left one extremely tired and powerless. The infected may experience nausea, vomitting, body pain, and soreness in the arms and legs. ...read more.

It became so brutal that on October 18, 1351, The Ordinance of Labors was published which limited the freedom of peasants to move around in search of lucrative work. The economic impact of the Black Death was major. Due to the deaths of so many people, wages rose dramatically, giving the working class some chance of improving the condition of their own employment. Agricultural prices had fallen quickly jeopardizing the fortunes and power of the aristocracy whose wealth was based on land. The death of so many people concentrated wealth in the hands of survivors. In many cases, those workers who remained alive could earn up to five times what they had earned before the plague (Zapotoczny,p.2). ...read more.