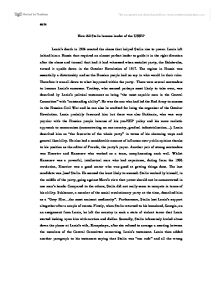 How Did Stalin Become Leader of the USSR?

How did Stalin become leader of the USSR? Lenin's death in 1924 created the chaos that helped Stalin rise to power. Lenin left behind him a Russia that required an almost perfect leader to guide it in the right direction after the chaos and turmoil that had it had witnessed when socialist party, the Bolsheviks, turned it upside down in the October Revolution of 1917. The regime in Russia was essentially a dictatorship and so the Russian people had no say in who would be their ruler. Therefore it was all down to what happened within the party. There were several contenders to become Lenin's successor. Trotksy, who seemed perhaps most likely to take over, was described by Lenin's political testament as being "the most capable man in the Central Committee" with "outstanding ability". He was the one who had led the Red Army to success in the Russian Civil War and he can also be credited for being the organiser of the October Revolution. Lenin probably favoured him but there was also Bukharin, who was very popular with the Russian people because of his pro-NEP policy and his more realistic approach to communism (concentrating on one country, gradual industrialisation...). Lenin described him as "the favourite of the whole party" in terms of his charming ways and general likeability. He also had a considerable amount of influence over public opinion thanks to his position as the editor of Pravda, the party's paper. Another pair of strong contenders was Zinoviev and Kamenev who worked as a team, complimenting each well. ...read more.

This meant that, yet again, the party lacked structure and direction, making the split evermore prominent. Furthermore, to add to the weakness of the party, the democratic centralists in it were constantly showing the discontent at the fact that their party's members were gradually losing more and more power to the Bolsheviks. The workers' opposition were also causing trouble for the party because they resented the fact that the soviets' power was disappearing, despite the fact that Lenin had supposedly heavily supported them ("All Power To the Soviets"). The party was a very weak structure by Lenin's death in 1924 and Stalin made the most of this disorganisation and lack of communication in his climb to power. To add to its weaknesses, Stalin's opposition also made a number of mistakes that turned out to be critically vital to Stalin's rise. The first of these involve Lenin's political testament. Despite the fact that Lenin's testament heavily criticised Stalin, it turned out to be a triumph for Stalin. In his testament, Lenin didn't really want to show any big amount of favour for any of the contenders for power because he probably aimed to have a collective leadership in the party, another step towards communism. Therefore, as well as showing a certain amount of praise to each of them, he also criticised them heavily for their defaults. Whilst Trotsky is described as having "excessive self-assurance" and "preoccupation with the purely administrative side of the work", Bukharin is suspected of being "scholastic" and having "never made a study of dialects" and Kamenev and Zinoviev are accused of not having cooperated in the October Revolution. ...read more.

Stalin's position in the party was also another strength of his. Being in the middle, he could allow himself to be flexible with his policies and this was a big advantage when it came to the insecurity of the NEP. He was also general secretary for the party, giving him the possibility to arrange meetings and appointments to a certain extent. In conclusion, despite the fact that Stalin started off as the least likely contender to become ruler of Russia after Lenin's death, it is much easier to understand why after this fantastic essay. However, there are also other questions concerning his death that can be raised. Was Stalin what the USSR needed at the time? And would that help explain his rise to power? Was a leader like Stalin, who eventually went on to become the most feared dictator of the 20th century, the kind of leader that would have always emerged from Marxism? American historian Stephen Cohen argues that the system that Lenin set up in the USSR was fated to find a leader like Stalin and that "Stalinism" was the inevitable cause of it all. I disagree completely. I believe that, had Lenin survived longer, he would have no doubt ensured that a different, "safer" leader (or leaders), more similar to himself, would have been in charge after his death. Stalin gave communism a very bad image and he put the most of the world of it. Had Stalin not risen to power, would there now be some states that had turned to communism and were now thriving, and better off than ever before? ?? ?? ?? ?? sam ...read more.