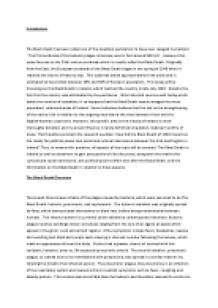 How did the Black Death of 1348 impact on the rivalry for political power and social and cultural dominance between the Irish and English in Ireland?

﻿Introduction The Black Death has been called one of the deadliest pandemics to have ever ravaged humankind . The first outbreak of the bubonic plague in Europe, was in fact around 540 A.D. , however this essay focuses on the 14th century outbreak which is usually called the Black Death. Originally from the East, the European outbreak of the Black Death began in the spring of 1348 when it reached the shores of Italy by ship . This outbreak lasted approximately three years and is estimated to have killed between 25% and 50% of Europe's population . This essay will be focussing on the Black Death in Ireland, which reached the country in late July 1348 . Despite the fact that the country was obliterated by the pestilence , little historical sources exist today which detail the number of casualties. It so happens that the Black Death mainly ravaged the more populated, colonised areas of Ireland . Some historians believe that this led to the strengthening of the native Irish in relation to the ongoing race-war at the time between them and the English-Norman colonisers. However, this specific area in the history of Ireland is never thoroughly detailed, and its actual influence is rarely definitely stipulated, making it worthy of study. This therefore prompts the research question: How did the Black Death of 1348 impact on the rivalry for political power and social and cultural dominance between the Irish and English in Ireland? Thus, to answer this question, all aspects of the topic will be covered. The Black Death in Ireland as well as elsewhere to gain perspective will be discussed, along with the rivalries for cultural and social dominance, and political power before and after the Black Death, and the information on the Black Death in relation to these aspects. The Black Death Overview There exist three known strains of the plague caused by bacteria, which were assumed to be The Black Death: bubonic, pneumonic, and septicaemic . ...read more.

The Irish parliaments were summoned and representatives were elected . The parliament continued to publish and promulgate English law through holding assemblies and parliaments and tried to prevent subdivision of lordships, which promoted rebellion of the native Irish . Thus, the English colony was strengthened and securely established by the early fourteenth century. Both the Irish and the English had small advancements in their campaigns against one another before the Black Death. In the early fourteenth century the native Irish recovered ground in the form of weaker settlements and encircled strong ones, essentially disrupting communications and causing isolation of the settlements . Other factors contributed to resurgence in the first part of the fourteenth century, namely sharpened military tactics, a weak central administration and improved leadership . Therefore, it is evident that the Irish were beginning to retaliate in terms of the contest for political power before the Black Death. The Rivalry for Social and Cultural Dominance in Ireland before the Black Death Similarly, a background into the cultural conflict in Ireland is necessary to understand whether the Black Death influenced the rivalry between the Irish and English. 'Gaelicisation' is essentially "a breaching of the boundaries of Anglo-Norman language and custom as they interacted with the Gaelic-Irish" (O'Keeffe, 12). Therefore Gaelicisation includes intermarriages, along with the preference of the Irish language, dress, customs, and changing to a Gaelic form of one's name. Initially Gaelicisation began with Strongbow's marriage, however it then continued and was rampant in the first half of the fourteenth century . Although the Normans and English had a culture of their own, their culture was merely absorbed into the internal politics of Ireland and as such, due to Gaelicisation and merging of cultures, the Normans were reportedly "more Irish than the Irish themselves" . On the other hand, there was also 'Anglicisation' which involved similar aspects as Gaelicisation bar the fact that for Anglicisation it was in fact the native Irish who were conforming to the invaders' ways . ...read more.