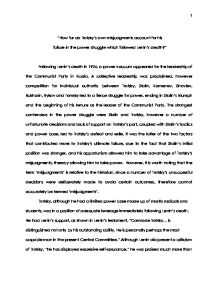 How far do Trotsky(TM)s own misjudgments account for his failure in the power struggle which followed Lenin(TM)s death?

"How far do Trotsky's own misjudgments account for his failure in the power struggle which followed Lenin's death?" Following Lenin's death in 1924, a power vacuum appeared for the leadership of the Communist Party in Russia. A collective leadership was proclaimed, however competition for individual authority between Trotsky, Stalin, Kamenev, Zinoviev, Bukharin, Rykov and Tomsky led to a fierce struggle for power, ending in Stalin's triumph and the beginning of his tenure as the leader of the Communist Party. The strongest contenders in the power struggle were Stalin and Trotsky, however a number of unfortunate decisions and lack of support on Trotsky's part, coupled with Stalin's tactics and power base, led to Trotsky's defeat and exile. It was the latter of the two factors that contributed more to Trotsky's ultimate failure, due to the fact that Stalin's initial position was stronger, and his opportunism allowed him to take advantage of Trotsky's misjudgments, thereby allowing him to take power. However, it is worth noting that the term 'misjudgments' is relative to the historian, since a number of Trotsky's unsuccessful decisions were deliberately made to avoid certain outcomes, therefore cannot accurately be termed 'misjudgments'. Trotsky, although he had a limited power base made up of mostly radicals and students, was in a position of adequate leverage immediately following Lenin's death. He had Lenin's support, as shown in Lenin's testament, "Comrade Trotsky... is distinguished not only by his outstanding ability. ...read more.

Trotsky especially so, did not pay regard to the threat of Stalin's increasing power base. Regardless of Trotsky's motivation however, the results were the same, he lost his support in the party and was eventually exiled. Trotsky's main shortcomings were offset by Stalin's strengths - mainly - but also Kamenev and Zinoviev's at the beginning. Stalin had built up a strong power base first by controlling party membership through the Lenin Enrolment. This had been a series of structural changes to the party's membership, which had been conducted under Stalin's supervision. This allowed him to weed out elements who were sympathetic to Trotsky, and replace them with poor, uneducated proletarians who supported him instead. Second, Stalin took control of the party's organization, by gaining the ability to select the delegates attending the annual party congress. He could then fill the congress with again, his supporters. Lastly, Stalin also had positions in the Orgburo and the Secretariat. As the General Secretary of the party he was aware of all happenings and could control what was discussed and what information the other party members were given. This power gave him the ability to 'deliver the vote' in party assemblies. He was also involved in publishing the Communist newspaper, Pravda, which gave him a suitable platform for propaganda. Despite this, Stalin was underestimated by all the other contenders. ...read more.

In this case, Trotsky's ill-judgment translated directly into loss of support. Furthermore, Trotsky once again was idle when Lenin's Testament was suppressed. The reasons for this are unclear, although again it is possible that Trotsky did not want to create factionalism or weaken the party. Releasing Lenin's Testament would have weakened the other contenders' positions much more than it would have weakened Trotsky's, since Lenin clearly favored Trotsky as the most competent leader. Instead of seizing the opportunity to improve his position, Trotsky missed a valuable chance to build support for his policies. Trotsky's lack of support, and choice to pursue paths such as campaigning against bureaucratization, which failed to attract the attention of the party members, led to his removal as a candidate for leadership. Stalin's pragmatism and opportunism however, on the other side of the spectrum, allowed him to be victorious in the power struggle and go on to become a major leader of Communist Russia. However, it is clear that Trotsky's misjudgments were not the only cause of his failure, Trotsky's initial position was much weaker than Lenin's, and his unwillingness to take hard stances out of fear of dividing the party held him back. Trotsky's misjudgments then played a minor role in his failure, but the true cause was his lack of future vision and disregard for the need for party support. , ?? ?? ?? ?? 1 ...read more.

This is a very good answer which covers all the main points. Some points could be explored with a little more detail and less of a reliance on quotations would also add to its merits. It would also benefit from a clear thesis - which is offered in the conclusion but the answer would be more persuasive if constant references were made to it throughout the essay to add weight to the evidence presented. Nevertheless, a well written answer.