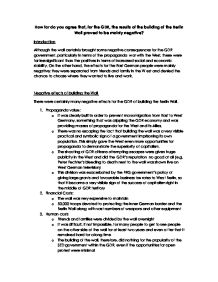 How far do you agree that, for the GDR, the results of the building of the Berlin Wall proved to be mainly negative?

How far do you agree that, for the GDR, the results of the building of the Berlin Wall proved to be mainly negative? Introduction Although the wall certainly brought some negative consequences for the GDR government, particularly in terms of the propaganda war with the West, these were far less significant than the positives in terms of increased social and economic stability. On the other hand, the effects for the East German people were mainly negative; they were separated from friends and family in the West and denied the chance to choose where they wanted to live and work. Negative effects of building the Wall There were certainly many negative effects for the GDR of building the Berlin Wall. 1. Propaganda value: o It was clearly built in order to prevent mass migration from East to West Germany, something that was crippling the GDR economy and was providing masses of propaganda for the West and its Allies. ...read more.

Human costs o Friends and families were divided by the wall overnight o It was difficult, if not impossible, for many people to get to see people on the other side of the wall for at least two years and even after that it remained hard for a long time o The building of the wall, therefore, did nothing for the popularity of the SED government within the GDR, even if the opportunities for open protest were minimal Positive effects for the GDR On the other hand, these negative effects were certainly a price worth paying for the GDR government and, in many respects, the people benefited too. 1. Benefits to the economy: o The wall immediately stopped the flow of emigration (over 3.5 million from 1949-61) of those people the GDR most needed to build its economy. ...read more.

o It allowed the SED to begin building an even more markedly socialist society (e.g. Honecker's demarcation policies in the 1970s) Conclusion On balance, the positives for the GDR government far outweighed the negatives. It allowed them security in terms of controlling the population, planning economic policy and building a more socialist society. For the ordinary people, however, the benefits were more mixed and the evidence is less clear because it is difficult to assess the extent of support for the government during the period. It certainly had some very painful effects in terms of separation from friends and families, but on the other hand it can be argued that they did gain from the increased stability. Overall, the migration before 1961 and the events from 1989 make it difficult to escape the conclusion, that for the East German people, they would prefer the wall had never been built. ...read more.