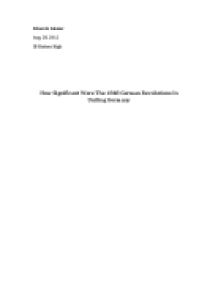 How Significant Were The 1848 German Revolutions In Uniting Germany?

In 1848 concessions were made to state that unity was now conservative. A topic of discussion from these concessions was the Imperial Diet into a constituent assembly elected by the people. Meanwhile, others were more or less vague in discussion about a united Germany. These concessions forced liberals to elect between a united Germany or un-united Germany with democracy. This potentially led to broad popular support for unity. Once again setting a basis for the ?united Germany? to come. 1848 further demonstrates the ascendancy of Prussia. During this time period Prussia faced a sizable economic expansion. This energized the economy and increased economic fortune of its citizens. Prussia also became dominant because its increase government expenditure in its military. Finally, the Prussian constitution (December 1848) enabled rights to assembly, religion, and speech. ...read more.

It is evident that the 1848 German revolutions did play a part in unifying Germany even if the revolutions did fail. The revolutions proved to be a ?genuine turning point? (Farmer). The fact that during 1848 brief experiments with constitutions occurred assisted countries in believing in the strengthening of unity and leveling regional and social inequalities. It can also be noted that the liberal and democratic experiments were never lost in the reborn autocratic regimes. It is said that 1848 ?left behind universal manhood suffrage as a great legacy of the continental revolution? (Farmer). Conclusively, while the revolutions were able to set basic ideas towards a united Germany through: the Frankfurt Parliament, concessions, ascendancy, and nationalism, it was just the beginning. With all that occurred in the revolutions, it does not suffice enough to now make the claim that the revolutions were of major significance to the unification of Germany. ...read more.