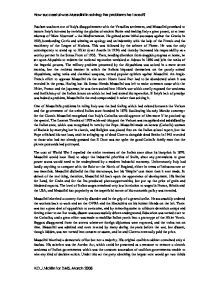 How Successful was Mussolini in solving the problems he faced?

Fascism was born out of Italy's disappointment with the Versailles settlement, and Mussolini promised to restore Italy's fortunes by reviving the glories of ancient Rome and making Italy a great power, or at least mistress of 'Mare Nostrum' - the Mediterranean. He gained some initial successes against the Greeks in 1923, bombarding Corfu and winning an apology and an indemnity with the help of the French and the machinery of the League of Nations. This was followed by the seizure of Fiume. He was the only contemporary to stand up to Hitler (over Austria in 1934) and thereby increased his respectability as a worthy partner in the Stresa Front of 1935. Then, needing diversion from sluggish progress at home, he set upon Abyssinia to redeem the national reputation tarnished at Adowa in 1896 and join the ranks of the imperial powers. The military problem presented by the Abyssinians was solved in a mere seven months, but the ruthless manner in which the Italians imposed themselves on the poorly armed Abyssinians, using tanks and chemical weapons, turned popular opinion against Mussolini. ...read more.

Mussolini would have liked to adopt the industrial priorities of Stalin, since any pretensions to great power status would need to be underpinned by a modern industrial economy. Unfortunately Italy had hardly anything to compare with the Ruhr or the North of England, either in terms of infrastructure or raw materials. Mussolini did build the first motorways, but his 'Empire' cost more than it ever made. In default of the real thing, therefore, Mussolini fell back upon the appearance of development. His Battles for Land, for Grain and for the lira produced photo-opportunities, but put up the price of grain and hindered exports. The level of Italian wages remained very low in relation to wages in France, Britain and the USA, and Mussolini lost popularity as the superficial nature of his economic policy was revealed. Mussolini inherited a country riven by disorder and in the grip of a general strike. He successfully ordered the workers back to work and set the OVRA and the Blackshirts on his former friends on the left. ...read more.

The classic problem of autocracy is the management of the succession; Mussolini solved this by piloting his regime to such total disaster that there was no succession. He was the first and last Duce. The most strident challenge to Mussolini's regime came from Matteotti. The problem certainly went away, though Mussolini was somehow reluctant to claim the credit. The problem posed by his would-be assassins was solved by their poor marksmanship, and in one case by his thrusting chin which, appearing before the rest of his face, caused Violet Gibson to let fly prematurely. Mussolini had identified Italy's needs as 'peace and quiet, work and calm'. He would 'give these things with love if possible and with force if necessary.' What he actually achieved was war, disturbance, unemployment and stress, given with gratuitous vindictiveness but not backed up with sufficient force to ensure his own survival. ?? ?? ?? ?? How successful was Mussolini in solving the problems he faced? H.D.J.Nicklin for DAIS, March 2008 ...read more.