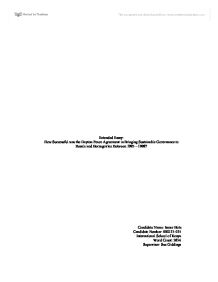 How Successful was the Dayton Peace Agreement in Bringing Sustainable Governance to Bosnia and Herzegovina Between 1995 1998?

Extended Essay: How Successful was the Dayton Peace Agreement in Bringing Sustainable Governance to Bosnia and Herzegovina Between 1995 - 1998? Candidate Name: Ismar Hota Candidate Number: 000213-015 International School of Kenya Word Count: 3836 Supervisor: Sue Giddings Table of contents: Abstract 3 Introduction 4 Democratization 5 Sovereignty of the state 7 Multi-Ethnic Policies 9 Human Rights in Bosnia 13 Impacts on civil society 15 Conclusion 16 Works Cited 17 Appendix 1 25 Appendix 2 26 Abstract: The topic of this extended essay is how successful was the Dayton peace agreement in bringing sustainable governance to Bosnia and Herzegovina between 1995 - 1998. In order to judge success a thorough research was conducted that included 21 sources in total; 9 primary and 12 secondary. When researching for this topic I have found a wide range of sources which allowed me to choose the best information possible, in order to judge the success. Reports from the High Representatives and the analysis by David Chandler, Faking Democracy in particular were the sources that gave detailed explanations that allowed for answering this question. The main aims that the Dayton provided for the state of Bosnia were ending of the Ethnic conflict, set up democratic government and protection of Human rights which provided a steady return of the Bosnian refugees. The Dayton agreement was necessary because the ethic conflict that was raging in Bosnia between 1992-1995 was falling out of proportions and with three warring ethnic groups, the world decided to take the initiative to finally settle a war in the heart of Europe. The International intervention stressed that Western democracy will bring the ethnic coexistence that existed in Bosnia before the war back. However the international community quickly ran into barriers that significantly changed their planned course of action. However with time the multi ethnic composition slowly but surly came into place. Today the state of Bosnia has managed to come onto a road that promises that the country will become a full member of NATO and the EU. ...read more.

The Bosniak President Alija Izetbegovic sent an open letter to the office of the High Representative where he stated "Dayton did not establish a protectorate and you aren't the protector" (Chandler 71). While the Republika Srpska's President Biljana Plavsic criticized the international bodies of legitimizing the reinterpretation of the agreement (Plavsic). It turns out then that the multi-ethnic goal proposed by the international bodies in the Dayton didn't come with much success. The huge political administrations that require a tripartite consensus at all times from three different ethnic groups with three completely different vital interests meant that the international bodies had to step in and settle the issues that the local policy makers weren't able to do themselves. Human Rights in Bosnia: When the war ended Bosnia had 2.2 million of people who were either refugees or internally displaced people (IDP) (The State of Annex VII). During the creation of Dayton international bodies believed that securing human rights is the key to bring security to the people of Bosnia which over a period of time will encourage the return of refugees and IDP's back home (Chandler 90). The International body and especially the United States regarded the implementation of human rights as a fundamental pillar in the creation of Dayton, "Human rights is the key to most aspects of political and civil implementation of the agreement. It is only when human rights are fully respected that the political life in the country can free itself of fear that is now so obvious. Only when the human rights are satisfied the refugees and IDP's will start to return in greater number" (2nd Report of the High Representative for Implementation of the Bosnian Peace Agreement to the Secretary-General of the United Nations) [See Appendix I]. With the years after the war there were very little human rights violations. However it can be argued whether the implementation of the human rights laws is successful since Bosnian ethnic groups have generally separated and don't live together like they did before the war. ...read more.

Print. Annotation: This source is a book by Susan Woodward, an expert scholar and political adviser on Balkan, East European, and post-Soviet affairs. The purpose of the source is to show the link between the break up of Yugoslavia and the links it has to the Cold War. The use of this source to an historian studying this topic is to understand that there is a link as Yugoslavia was officially in Non-aligned Movement on paper but in reality she played a significant involvement in the Cold war. The limitation of the source is that it is an opinionated analysis which doesn't provide many counterarguments. Appendix 1: Such a heavy emphasis on the human rights is a direct consequence of the war in Bosnia during which an infinite number of human rights were broken hence the human rights are a very important segment in reconstructing the state. With the Dayton agreement the citizens of Bosnia enjoy the highest level of human rights intentionally recognised and parts of Dayton, Annex 4 and Annex 6 incorporated 16 human rights agreements into Bosnian law. This provided more human rights protection to the Bosnian citizens than to the any other person in the world. Appendix 2 The figures do show improvements and the economic growth in the Federation for the period of 1996 was estimated at 50%, however the average wage still remains very low at 290 DM (150�) (Chandler 105). While in Republika Srpska the average wage is 67 DM (35�) (RRTF: Report July 1997). The poor living conditions amongst the locals is another discouraging factor for the refugees to return as most of them live in countries abroad where they can achieve better standards of living than in Bosnia and therefore even if they return they would be under frustrations from relative poverty (Chandler 107) On top of all that it's been estimated that between 50-65 % of the housing in Bosnia has been destroyed by the war (Little 8). The process of reconstruction is slow and the refugees therefore have nowhere to return. ?? ?? ?? ?? 000213-015 17 ...read more.