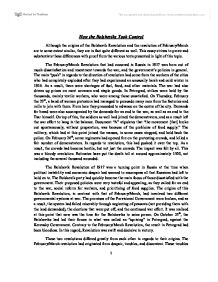 How the Bolsheviks took power

How the Bolsheviks Took Control Although the origins of the Bolshevik Revolution and the revolution of February/March are to some extent similar, they are in fact quite different as well. This essay strives to prove and substantiate these differences with proof from the various texts presented in light of this topic. The February/March Revolution that had occurred in Russia in 1917 was born out of much dissatisfaction and resentment towards the war, and the government's policies in general. The main "push" in regards to the direction of revolution had come from the workers of the cities who had completely exploded after they had experienced an unusually harsh and cold winter in 1916. As a result, there were shortages of fuel, food, and other materials. The war had also driven up prices on most common and staple goods. ...read more.

The military, which had at this point joined the masses, in some cases stopped, and held back the police. On February 26th, some regiments had opened fire on the protesting crowds, and killed a fair number of demonstrators. In regards to revolution, this had pushed it over the top. As a result, the crowds had become hostile, but not just the crowds. The impact was felt by all. This was a bloody revolution. Estimates have put the death toll at around approximately 1500, not including the several thousand wounded. The Bolshevik Revolution of 1917 was a turning point in Russia at the time when political instability and economic despair had seemed to encompass all that Russians had left to hold on to. ...read more.

In this regard, Revolution was swift and decisive in victory. These two revolutions differed greatly from each other in regards to their origins. The February/March revolution had originated from despair, troubles, and discontent. These troubles and manners of discontent had resulted in bloody strikes and protests over food and Governmental hostility, which eventually, after mass bloodshed, had led to full blown revolution. The Bolshevik revolution however was different. It was a turning point at which two governmental systems had come to clash against each other, one of which, the Bolshevik party, had been a residing hope for many Russians. The origins in many regards were political, as the opponent of the Bolsheviks, the "Provisional Government," had failed to hold societal support of their people. As a result of the position of the Bolsheviks, they were able to make the decisive decision to swiftly and bloodlessly take control, which they did almost effortlessly. ?? ?? ?? ?? 1 ...read more.