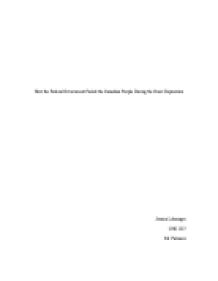 This only deepened the depression as government employees were put out of work and public work projects were cancelled. In 1935, Bennett created a new policy- to insure unemployment insurance, a reduced work week and minimum wages, industrial codes and permanent economic planning. This was unsuccessful and the provinces challenged the rights of the federal government to manage 4 these programs. Bennett raised tariffs levels by almost 50 per cent to protect manufactures and lead nations to lower tariffs on Canadian goods. Safarian claims ?this did nothing to increase exports and in some cases it increased export cost, reducing business.? Bennett government attempted to keep wheat prices from falling further by buying more than 200 million bushels before re-establishing the Wheat Board in 1935 to market wheat and assure farmers a minimum price for their crops. This failed and only resulted in the government losing more money. From 1930-1937, the federal government spent more then $400 million (about 40 per cent of the total cost,) to assist the provinces to fulfill their responsibility for providing unemployment relief. ...read more.

Men in the camps were frustrated the government could not provide them with meaningful work. In April 1935, the men?s unhappiness boiled over. 15 000 men from British Columbia relief camps went on strike and congregated Vancouver. The movement was months of cross-country protest, which culminated in a riot in the streets of Regina. A year later, the relief camps were shut down. 170, 248 men stayed in the camps. When the Canadian government failed to deal with the economical set backs of the Great Depression, the citizens were the ones who had to live with it. The first major set back was when Mackenzie Kings failed to release federal funds because he was in denial the depression was happening and thought it would work its self out. Then, Richard Bennett dumped the economic problems on cities that could not deal with the 6 issues. Lastly, the Government relief camps that were formed to bring Canada?s economic state back up but ending in a riot because of unfair treatments in the camps. Since Canada did not have and effective system for dispending public welfare, many of the unemployed had to rely on private charity. In conclusion, the federal government failed the Canadian citizens during the great Depression. ...read more.