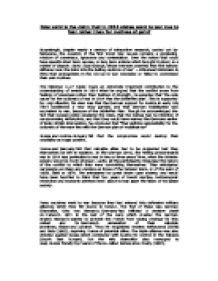 How valid is the claim that in 1914 states went to war due to fear rather than for motives of gain?

How valid is the claim that in 1914 states went to war due to fear rather than for motives of gain? Surprisingly, despite nearly a century of exhaustive research, carried out by historians, the question of the first World War causes remains a perplexing mixture of consensus, ignorance and contestation. Even the notion that could have specific short term causes, or long term actions which brought it about, is a matter of dispute. David Lloyd George, whose memoirs asserted that 'the nations slithered over the brink into the boiling cauldron of war' - influenced historians to think that protagonists in the run-up to war concealed or failed to understand their own motives. The historian A.J.P Taylor made an extremely important contribution to the understanding of events in 1914 when he argued that the conflict arose from feelings of weakness rather than feelings of strength. He asserted that 'the sole cause for the outbreak of war in 1914 was the Schlieffen plan'. This is supported by Luigi Albertini, his view was that the German support for Austria in early July 1914 constituted a very risky gamble, and that German mobilisation was equivalent to war, because of the Schlieffen Plan. Though he acknowledged the fact that Russian policy escalated the crisis, that the Serbsa had no intention of compromising withAustria, and that Grey could have warned the Germans earlier of likely British intervention, he ...read more.

Both were less of a threat to 'democracy' than to British trading interests. The French equivalent was to demand the return of Alsace and Lorraine. It was only indirectly, and over the next course of the year, that the dismantling of the Habsburg Empire and the establishment in its place of independent nation states, also became an article of faith for allies. Russia had little to gain by defeating Germany, expect for more troublesome Polish subjects, and its official war aims soon came to concentrate upon the old attractions of the Dardanelles and Constantinople. In Mar-Apr 1915, Britain and France finally agreed that Russia should had these in the event of victory, as long as they were compensated by gains in Egypt and the Near East. In the event of an Entente Victory, therefore the Ottoman Empire, too, was doomed to disintegration The claim that in 1914 States went to war due to motives of gain. Although the victors in 1918 were quick to formulate questions of 'war guilt', the outbreak of the conflict makes more sense if it is seen as a combination of miscalculations. The government of Austria - Hungary erred in believing that a clash with Serbia could be settled without wider complications. Russia's partial mobilisation on 30 July was undertaken without sufficient awareness of its effect upon German policy. ...read more.

The greatest uncertainties surrounded Italy, formally linked by the Triple Alliance to Germany and to Austria-Hungary, yet set against the latter by all the precedents of 19ths century history. Only the Entente could offer Italythe Habsburg territories in the Tyrol and down the Adriatic cost that its nationalists demanded to complete the process of unification. Thus Italy finally sided withFrance, Britain and Russia. "Fifty years were spent in the process of making Europe explosive. Five days were enough to denote it'. June 28th 1914, the final crisis was triggered by the assignation in the Bosnian town of Sarajevo of the Archduke Franz Ferdinand, nephew of the Austrian Emperor. His murderer was a member of a Serbian terrorist organisation known as the 'Black Hand'. Is another example of gain, as their motives behind the assassination were annexing Bosnia. In conclusion, through assessing why states went to war in 1914, we analysed both sides of the arguments. States went to war due to the fear; like the Triple Entente who simply went to war for their own survival as major powers.The proclivity of much of the general historiography on the war in Europe has been to emphasise the constraining effects of circumstance on individual actors and to alleviate individuals' responsibility for causing a world war. Many leaders are held to have acted 'defensively' due to fear, feeling that their nation, in the words of study written by H.H Herwig (The Origins of War) was 'in decline' or, at least 'seriously threatened'. ...read more.