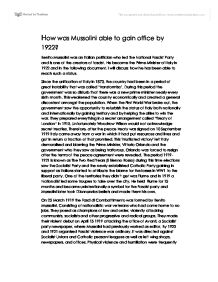 How was Mussolini able to gain office by 1922

How was Mussolini able to gain office by 1922? Benito Mussolini was an Italian politician who led the National Fascist Party and is one of the creators of fascist. He became the Prime Minister of Italy in 1922 and in the following document, I will discuss how he has been able to reach such a status. Since the unification of Italy in 1870, the country had been in a period of great instability that was called 'transformiso'. During this period the government was so disturb that there was a new prime minister nearly every sixth month. This weakened the country economically and created a general discontent amongst the population. When the First World War broke out, the government saw the opportunity to refurbish the status of Italy both nationally and internationally by gaining territory and by helping the allies to win the war. They prepared everything in a secret arrangement called "Treaty of London" in 1915. Unfortunately Woodrow Wilson would not acknowledge secret treaties. Therefore, after the peace treaty was signed on 10 September 1919 Italy came away from a war in which it had put resources and lives and got in return a fraction of that promised. ...read more.

They made their violent debut on April 15 1919 attacking the office of Avanti, a Socialist party newspaper, where Mussolini had previously worked as editor. By 1920 and 1921 organised Fascist violence was ordinary. It was directed against Socialist Unions and Catholic peasant leagues as well as left wing shops, newspapers, and offices. Physical violence and humiliation were frequently used during those raids on Socialist and left wing activities. The government would turn a blind eye to this as they saw it as a cheap way of getting rid of Socialism, in some cases the Fascists were actually assisted by the police or military. The consequence of this was that Socialist and Catholic Unions were mostly destroyed. And as Socialism declined, Fascist membership grew. In the north most towns had a Fascist led organisation, though it remained relatively weak in the south. After the failure of the elections of 1919, Fasci di Combattimento had to change their beliefs from anti- clerical to pro clerical. This new support was clearly expressed by Mussolini in his first speech at the parliament, however he remained anti-socialist. ...read more.

The people also feared that the socialists start a revolution so they were encouraged to have a strong anti-socialist leader. These events proved Mussolini that he could gain even more support and became more and more ambitious. Finally came the march on Rome planned by the Quadrumvirate (the 4 most important generals in the Fascist party) accepted by Mussolini that stayed in Milan in case the events turned bad. The current Prime Minister Luigi Facta asked the king Victor Emmanuelle to involve the army to counter the march, however the king refused according to some historians in fear of civil war. This engendered the resigning of the prime minister and Mussolini was appointed as new Prime Minister. This is the way Mussolini came to power. It is somewhat difficult to say if these series of events were calculated by Mussolini or pure hazard. In any case, everything went in the way Mussolini wanted and he profited well of his opportunities. It is sometimes funny to see that things could have been totally different with a word or a signature, in this case the signature of the king would have changed a lot and it is still a mystery why he acted this way. ...read more.