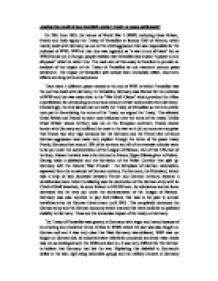 hrough an analysis of the consequences of the treaty of Versailles, it is made very clear that immediately, the peace treaty weakened Germany greatly and it also humiliated the country.

Analyse the result of one twentieth century treaty or peace settlement? On 28th June 1919, the victors of World War I (WWI) including Great Britain, France and Italy signed the Treaty of Versailles at famous Hall of Mirrors, which mainly dealt with Germany as one of the chief aggressors that was responsible for the outbreak of WWI. WWI at that time was regarded as "a war to end all wars" but as WWII broke out in Europe, people realized that Versailles was indeed "a peace to end all peace" which is rather true. The main aim of this essay is therefore to provide an analysis of the impact of the Treaty of Versailles as one twentieth century peace settlement. The impact of Versailles will include both immediate effect, short-term effects and long-term consequences. There were 5 different peace treaties at the end of WWI of which Versailles was the one that dealt with Germany. In Versailles, Germany was blamed for the outbreak of WWI and that was made clear in the "War Guilt Clause" which provided the Allies a justification for demanding an enormous amount of war indemnities from Germany. Interestingly, the U.S Senate did not ratify the Treaty of Versailles so the U.S neither took part in formulating the terms of the Treaty nor signed the Treaty. ...read more.

Exploiting this disbelief in Germany's defeat in the war, right-wing nationalist groups and the military Junkers in Germany deliberately built up the "Stab in the back" myth in which Germany did not lose in WWI but was betrayed by the socialists and the Jewish people. This was the beginning of the rise of the Nazis. Hitler also a WWI veteran, was completely dismayed at the news of Germany's defeat and sought to restore the country's prestige and power. He was also one of the most fervent believers of the "Stab in the back" myth. Joining the DAP in 1919 and transformed it into the NSDAP in 1920, Hitler soon made his name famous in Germany with the failed "Munich Beer hall putsch" in 1923. Although the putsch failed, it reflected the truth in Weimar Germany that social discontent was very high and there were challenges from both left wing groups and right wing groups to the Social Democrats Government. This social discontent was further exacerbated by the effects of the Hyperinflation in 1923 which was to a certain extent a short-term result of the Treaty of Versailles. With its economy ragged, it's industrial power decreased, Germany had huge difficulties in paying the war reparations demanded by the Allies. ...read more.

What was more dangerous was the British appeasement policy. There are those who are sympathetic with Chamberlain and said that policy was a genuine attempt to avert war and it was a realistic option but one must also see that Chamberlain had great support from the Government and the British people because they believed that the terms of Versailles were unjust for Germany therefore, for instance, when Hitler marched his troops into the Rhineland, the press said that "Hitler was walking into his own garden" which showed a very sympathetic attitude towards Germany. Hitler exploited this weakness and escalated it further and finally signed the Nazi-Soviet pact in 1939 which guaranteed the opening of a new war. Through an analysis of the consequences of the treaty of Versailles, it is made very clear that immediately, the peace treaty weakened Germany greatly and it also humiliated the country. It fueled German nationalism and hatred in Germany. Not only so, it created favourable conditions for authoritarian regimes like the one set up by Hitler in 1934 which was determined to reverse the treaty that humiliated its nation as one of the stepping stones to world dominance. But most unfortunately, the treaty showed its own flaws as there were those who were genuinely sympathetic with Nazi Germany and therefore appeased it and that finally led to the outbreak of WWII in Europe. ...read more.