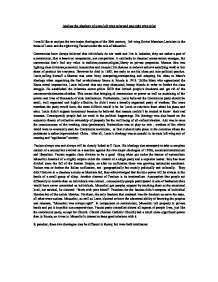 I would like to analyse the two major ideologies of the 20th century, left wing Soviet Marxism-Leninism in the times of Lenin and the right wing Facism under the rule of Mussolini.

Analyse the ideology of a one left wing ruler and one right wing ruler I would like to analyse the two major ideologies of the 20th century, left wing Soviet Marxism-Leninism in the times of Lenin and the right wing Facism under the rule of Mussolini. Communists have always believed that individuals do not work and live in isolation, they are rather a part of a community, that is based on cooperation, not competition. A similarity to classical conservatism emerges, but communists don't find any value in tradition,custom,religion,liberty or private properties. Marxes idea was fighting class divisions,economic inequalities and unequal life chances in order to achieve satisfying work or fair share of product for everyone. However he died in 1883, too early to see his ideas put into political practice. ...read more.

Lenin didn't support democracy because he believed that masses couldn't be trusted to know their real interests. Consequently people had no word in the political happenings. His ideology was also based on the economic theory of collective ownership of property for the well being of all-collectivization. Aim was to raise the consciousness of the working class (proletariat). Nationalism was to play no role , workers of the whole world were to eventually start the Communist revolution, at first it should take place in the countries where the proletariat is rather impoverished- China. After all, Lenin's ideology was successful in its main left wing aim of creating and "egalitarian" society. Facism always was and always will be closely linked to Il Duce. ...read more.

Mussolini got peoples support by touching them at the emotional level, not rational, he claimed: "think with your blood". Freedom for the fascists didn't compose of individual liberties but of the nation liberties. For them, the only freedom that mattered was the freedom so serve the state, all other were useless. Mussolini, as well as Lenin claimed to have the abnormal ability of knowing the peoples real interests, "Mussolini was always right". In comparison to communism, Mussolini left property in private hands and put it to public use-corporativism. Fascist party controlled almost all aspects of people lives, just like the communist party, accept for Church. Church (Roman Catholic Church) had a much more significant power than in Russia, so it was in Mussolini's interest to keep good relations with it. In paradox, these two ideologies may be different in theory, but were both totalitarian. ...read more.