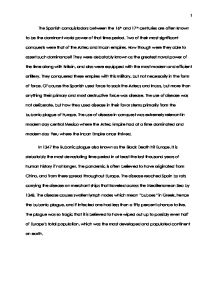 IB Extended Essay - How where the Conquistadors able to defeat the Incan and Aztec Empires?

The Spanish conquistadors between the 16th and 17th centuries are often known to be the dominant world power of that time period. Two of their most significant conquests were that of the Aztec and Incan empires. How though were they able to assert such dominance? They were debatably known as the greatest naval power of the time along with Britain, and also were equipped with the most modern and efficient artillery. They conquered these empires with this military, but not necessarily in the form of force. Of course the Spanish used force to sack the Aztecs and Incas, but more than anything their primary and most destructive force was disease. The use of disease was not deliberate, but how they used disease in their favor stems primarily from the bubonic plague of Europe. The use of disease in conquest was extremely relevant in modern day central Mexico where the Aztec Empire had at a time dominated and modern day Peru where the Incan Empire once thrived. In 1347 the Bubonic plague also known as the Black Death hit Europe. It is debatably the most devastating time period in at least the last thousand years of human history if not longer. The pandemic is often believed to have originated from China, and from there spread throughout Europe. ...read more.

Montezuma II is believed by many historians to have been murdered by his own Aztec people, the Spanish having him hostage and under their control demanded he and his people give up to the Spanish forces. It is highly speculated that he addressed his people and some of the Aztecs felt he betrayed them and so therefore they took his life, but also there is much speculation that possibly it could have been the Spanish that killed him. Although their Emperor had just died, the Aztec people proved that they were not going to be demanded and ordered by Cortes and the Spanish like Montezuma II had done. Meanwhile Cortes had to deal with forces sent by a personal enemy by the name of Velasquez to stop and take out Cortes. Cortes defeated the forces that were sent to defeat him despite the fact that he was out numbered. After his victory he returned to Tenochtitlan only to arrive at the same time that Montezuma II was murdered, and his successor Cuitahuac took the people Tenochtitlan against the Spaniards. Cortes and his men fled as the native Aztecs ran them out, Cortes barely escaped, but in the process lost nearly all of his material possessions including much of his troops' artillery. ...read more.

"The disease killed over 94% of the Inca population of about 16 million. During this bloody civil war many more diseases came about from the Europeans and killed many more" (Scholar). Warfare killed thousands of Incas. Disease killed millions. And it was a disease that killed the Sapa Inca (Only Emporor) Huayna Capac that originated a need for a civil war in the first place. Not to say Francisco Pizarro's strategic command and military tactics did not play a role in the decline of the Inca Empire, because they certainly did. However, 168 Spanish men would not have been able to conquer the Inca Empire of 16 million people without the primary assistance of diseases, such as smallpox, typhus, and the bubonic plague, that dispersed across the South American continent. The Aztecs and the Incas were two of the greatest civilizations in the world, but were destroyed by the Spanish. It was something of an inevitable fact though due to the disease that brutally transformed Europe into the strongest continent in the world physically. Also their common exposure to livestock further strengthened Europe's immunity to disease. The Incan and Aztec Empires never made global connections and never had been around European livestock. Thus, when Spain touched down in the Americas it didn't matter what their military strengths were, because these lost, destroyed, and forgotten civilizations began dying as soon as the Spanish stepped foot in the "New World". ?? ?? ?? ?? 1 ...read more.