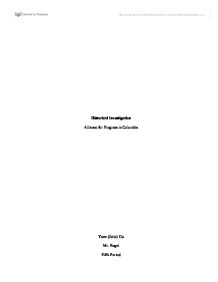 Historical Investigation Alliance for Progress in Colombia Yuan (Julie) Gu Mr. Engel Fifth Period PLAN OF INVESTIGATION The aim of the research was to prove that the Alliance for Progress established by President John F. Kennedy was able to successfully implement economic and social reforms in Colombia which allowed the nation to avoid the installment of a Communist regime. This foreign aid program was primarily launched in Colombia to improve the overall condition of the country which could be beneficial in resisting Communism. I am planning to compare the economy of Colombia before and after the formation of the Alliance for Progress by analyzing the information from Foreign Aid as Foreign Policy. This investigation also involved exploring the specific reforms applied to Colombia which can be found in Democracy in Colombia. Furthermore, I will be examining the political upheavals in Colombia and how the reforms were able to assist in defeating the Communist rebels by studying the events recorded in The Colombian Civil War. SUMMARY OF EVIDENCE Problems in Colombia before the Alliance for Progress Colombia had gained a depressing status of having economic instabilities with eight consecutive civil unrests occurred during the 1800s.1 President of the United States John F. ...read more.

working conditions, and violence was often employed and had been perceived as acceptable to achieve the mean.15 Socialism had also been developed in the country sponsored by the Workers Central Union which later led to the formation of the Colombian Socialist Party and the establishment of the Revolutionary Armed Forces of Colombia (FARC).16 The era of La Violencia in Colombia was launched by the Banana Workers Massacre where a renowned Colombian communist named Ra�l Eduardo Mahecha led a group of plantation workers in a strike that ended with violence. The strike was appeased when a maximum working hour was established along with securing the rights of the laborers.17 During El Bogotazo in 1948, the conservatives blocked several bridges to prevent the food supply aided by the United States to be delivered into the city of Bogot�. The United States was forced to install and fund an armed force in Colombia in order to defeat the rebels.18 EVALUATION OF SOURCES The printed reference of Foreign Aid as Foreign Policy: The Alliance for Progress in Latin America consisted analyses of John F. Kennedy's Alliance for Progress examined by Jeffrey F. ...read more.