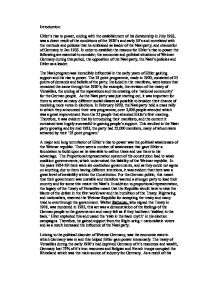 In order to establish the reasons for Hitlers rise to power the following are essential to consider; the economic and political situations of Weimer Germany during this period, the opposition of the Nazi party, the Nazis policies and Hitler as a lea

Introduction: Hitler's rise to power, ending with the establishment of his dictatorship in July 1933, was a direct result of the conditions of the 1920's and early 30's and correlated with the methods and policies that he embraced as leader of the Nazi party, and chancellor of Germany in Jan 1933. In order to establish the reasons for Hitler's rise to power the following are essential to consider; the economic and political situations of Weimer Germany during this period, the opposition of the Nazi party, the Nazi's policies and Hitler as a leader. The Nazi program was incredibly influential in the early years of Hitler gaining support and his rise to power. The 25 point programme, made in 1920, consisted of 25 points of demands and beliefs of the party. Included in the manifesto, were issues that remained the same through the 1920's; for example, the revision of the treaty of Versailles, the ending of the reparations and the creating of a 'national community' for the German people. As the Nazi party was just starting out, it was important for them to attract as many different social classes as possible to broaden their chance of receiving more votes in elections. In February 1920, the Nazi party held a mass rally in which they announced their new programme, over 2,000 people attended which was a great improvement from the 25 people that attended Hitler's first meeting. ...read more.

As a result of this along with the reparations Germany had to pay, the German money system had broken down and had only reached 47% of pre-war production levels. Germany was relying on foreign loans, especially from America, which was known as 'Dawes Plan' , to help Germany recover the finialical losses. However, Germany's reliability on foreign aid increased the widespread resentment of the public. In addition to this, the Wall Street Crash of 1929 left Germany in a worse state with 6 million people unemployed by the beginning of the 1930s. The German public were discontent with how the government handled the economic crisis and as a result of this, Hiter was able to use this to his advantage to promise a way out of unemployment and gain support. The elimination of opposition to the Nazi party was one of Hitler's main methods to gain total power in Germany. As two of the major parties were loosing votes, theSocialist party from 8,2 million votes in September 1930 to 7.2 in November 1932 and the German Democractic party from 1,3 million votes in 1930 to 0.34 in 1932, Hitler saw their main opposing power was the Communist Party.(KPD) Apart from the Nazi party they were the only other party to increase in votes; in September 1930 they had 4.6 million votes compared to the 5.98 million votes in November 1932. ...read more.

In addition to propaganda and the SA, Hitler himself was an incredibly influencial leader and his charismatic personality contributed to his rise in power. During elections, he was seen to be the only leader to fly around Germany to give speeches to the German public. Almost all of the Nazi parties campaign funds were spent on flying Hitler around Germany however, this successfuly resulted in an increase in seats in the Reichstag; in November 1932 the Nazi party had 230 seats compared to some of it's opposing parties such as the Communists with only 89 and the Centre party with only 75. Hitler's use of what he had and his own skills impacted his own rise to power as he knew what his own strengths were and used them to his own advantage. The individual methods that Hitler used and the conditions that Germany was in at the period of time helped Hitler's rise to power. The political and economic weaknesses of the Weimar Republic formed the foundations for Hitler's rise to power. Although, the success of Hitler's rise to power also has to consider the fact that the Nazi party's ideology and aims were appealing to the German public. Hitler also effectively took advantage of the use of propaganda and also his own potential as an influential leader. position ...read more.