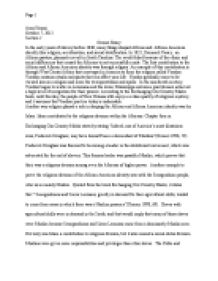 In the early years of slavery before 1830, many things shaped African and African American identity like religion, acculturation, and social stratification

﻿Page Amir Homsi October 7, 2012 Section 2 Gomez Essay In the early years of slavery before 1830, many things shaped African and African American identity like religion, acculturation, and social stratification. In 1822, Denmark Vesey, an African pasture, planned a revolt in South Carolina. The revolt failed because of the ethnic and social differences that caused the Africans to not successfully unite. The first contribution to the African and African American identity was through religion. An example of this contribution is through West Central Africa that converged in America to form the religion called Voodoo. Voodoo contains rituals and spirits that can affect your life. Voodoo gradually came to be viewed less as a religion and more for its superstitions and spells. In the nineteenth century, Voodoo began to scatter in Louisiana and the lower Mississippi and some practitioners achieved a high level of recognition for their powers. According to the Exchanging Our Country Marks book, until this day, the people of New Orleans still enjoy a certain quality of religious mystery, and it assumes that Voodoo practice today is undeniable. Another way religion played a role in shaping the African and African American identity was by Islam. Islam contributed to the religious division within the Africans. Chapter four in Exchanging Our Country Marks starts by stating ?Indeed, one of America?s most illustrious sons, Frederick Douglass, may have himself been a descendant of Muslims?(Gomez 1998, 59). ...read more.

Comparatively, Islam had a major impact on the process of social stratification within the early African American society. It has been noted that the Senegambians were very important to the launching of economies in Carolina, Georgia, Virginia, Maryland, and Louisiana because of their classification of being skilled black workers. They became one of the most important sources of slaves for North America. Senegambians mainly identified themselves religiously as Muslims. Muslims were deeply affected by the racist views the whites had towards other Africans and they would be encouraged to distance themselves from the average African and African American. This ruined the opportunities of building any sort of relationships between the Muslim and non-Muslim slaves. For example, a Muslim house slave would not be able to build a strong relationship with non-Muslim slaves because he had the perk of working indoors rather than outdoors like everyone else. Islam caused a division between the different Africans and Muslims were treated as higher class slaves. Likewise, another example of division was by bringing slaves from many different parts of Africa. Each kind of people had their own cultural practice and religious view. The Bambara people because they had a stereotypic image of being rebellious to their masters, and slaves originally from Sierra Leone were classified as farmers,fishers, and hunters. On the other hand, some of the Igbo people, who come from Bight of Biafra, would commit suicide because of their belief in reincarnation and belief that suicide will return them back to Africa. ...read more.

They had to realize that the greatest common factor between the different African and African Americans was their blackness. They could not escape the American way of life because it would be hard to blend in with their black color when they attempted to run away. On the other hand, acculturation had an impact on America from Africa when it is noted that herbalism, mental healing, and funeral traditions had Congolese and Angolan influences in the American South. Likewise, another example of America acculturating African heritage is because many women slaves were raped by European men for as long as slavery had begun. African men had a disadvantage when they attempted to intervene. However, sometimes intimacy and relationships between slaves and whites would develop and mixed race children would result. These mixed race people were named mulattos. Mulattoes had trouble being accepted with both white people or black people, and this became a lifelong problem. In conclusion, it is clear that the process of enslavement directly informed the restructuring of a slave?s identity. In fact, a statement from Exchanging Our Country Marks states that ?Africans brought to North America did not conceive of human society in terms of race; however, by the end of legalized slavery, the concept of race had crystallized in the community? (Gomez 1998, 209). Race was never introduced until the end of legalized slavery. The Africans shaped an identity of their own. Division between the Africans still remained through religion, and cultural differences, but they still found a common blackness within themselves. ...read more.