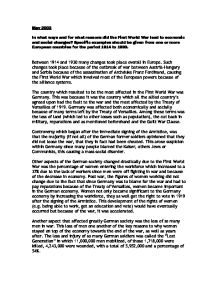 In what ways and for what reasons did the First World War lead to economic and social changes? Specific examples should be given from one or more European countries for the period 1914 to 1930

May 2003 In what ways and for what reasons did the First World War lead to economic and social changes? Specific examples should be given from one or more European countries for the period 1914 to 1930. Between 1914 and 1930 many changes took place overall in Europe. Such changes took place because of the outbreak of war between Austria-Hungary and Serbia because of the assassination of Archduke Franz Ferdinand, causing the First World War which involved most of the European powers because of the alliance systems. The country which resulted to be the most affected in the First World War was Germany. This was because it was the country which all the allied country's agreed upon had the fault to the war and the most affected by the Treaty of Versailles of 1919. Germany was affected both economically and socially because of many terms left by the Treaty of Versailles. ...read more.

This loss of men one another of the key reasons to why women stayed on top of the economy towards the end of the war, as well as years after. The loss and injury of so many German soldiers was called the "Lost Generation" in which 11,000,000 men mobilized, of those 1,718,000 were killed, 4,243,000 were wounded, with a total of 5,952,000 and a percentage of 54%. The Versailles Treaty as well as the war left the once great, vast German empire in lack of resources and trade. Industrial output fell by over 40% between 1914 and 1918. Machinery was, at the end of the war, obsolete in many cases, run by ill trained people since many of working men had been killed in the war. The economic crisis of food shortages and supplies left from the war left extreme poverty in Germany and led to hyperinflation. This was worsened by the huge reparations bill which Germany struggled to pay(only one payment made in 1922-�50 million). ...read more.

Reparations as well had to be paid by Germany because of the Guilt Clause which German officials agreed that Germany had to take all the blame for the outbreak of war. This not only scarred the German peoples' ego, but as well outraged them calling the officials who signed the treaty the November Criminals, thus gaining the Weimar Republic a bad reputation from the state. This as well was later called by Hitler as "The Stab in the Back". In conclusion, Germany was the country most affected by the First World War, estimating to have cost of $38 billion. In addition to the lost of money and drop of economy, there was a massive loss of lives (the "Lost Generation"). Losing over 1.7 young men, 4.3 wounded with total casualties to be over 7 million, this including imprisoned men and those listed missing. Socially as well many changed took place and left the German ego's shattered. (The diagram above shows how much each country spent on the World War One, Germany being the highest, followed by Great Britain. ...read more.