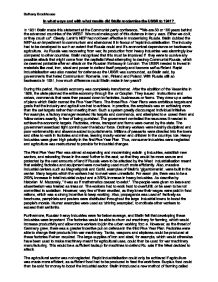 In what ways and with what results did Stalin modernise the USSR to 1941?

In what ways and with what results did Stalin modernise the USSR to 1941? In 1931 Stalin made this statement at the Communist party conference, ""We are 50 or 100 years behind the advanced countries of the WEST. We must make good of this distance in ten years. Either we do it, or they crush us". Clearly, Lenin's NEP had not been effective in modernising Russia. Stalin dubbed the NEP as an impediment to communism and abandoned it in favour of 'rapid industrialisation. The industry had to be developed to such an extent that Russia could end it's economical dependance on backwards agriculture. As Russia was recovering from war, its production from heavy industries was alarmingly low compared to other countries. Stalin recognised that this must be improved if they were to survive any possible attack that might come from the capitalist West attempting to destroy Communist Russia, which de deemed probable after an attack on the Russian Embassy in London. The USSR needed to invest in materials like coal, iron, steel and power to defend itself properly and become self sufficient. Rapid industrialisation was also needed for defense as the USSR was surrounded, as Stalin said, by governments that hated Communism: Romania, Iran, Finland and Poland. ...read more.

However, as the threat of Germany grew, there was a greater incentive put on defense in the third Five Year Plan. Factories were able to change their products into war machinery. Tanks, weapons and airplanes could be produced at these factories if when required. The large supplies of iron and steel, for example, which would otherwise have been used to make machinery meant for agricultural uses, could then be used for war machinery manufacturing. This would be a sufficient backup for machines to defend Russia if the West decided to attack. The agricultural sector was not neglected. Rapid industrialisation could only be achieved if agriculture was made more efficient, as sufficient food had to be produced to feed the workforce. Surplus food could then be sold for money to boost the industrial sector. Stalin introduced a new method of farming called collectivisation which encompassed grouping small, scattered farms in an area together in an efficient collective, or Kolkhozy. These peasants pooled their animals, tools and labour to work for the benefit of the whole community. The collectives had to sell most of their produce at low prices to the government. Any profits and surplus were theirs to keep or sell at a profit. ...read more.

Finally, Collectivisation was also part of the Five Year Plan, but it was less successful than industrialisation. It did not fulfill its targets under the Plan and grain production even declined from 1928 to 1932. This caused widespread famine later on. Even though millions of peasants died, the government still hoarded grain to sell to other countries to earn foreign currency to be used for investment in industry. Grain production then improved, but the livestock took till 1953 to regain its 1928 level due to all the killings earlier. Collectivisation was a success as it made Russia's agriculture more efficient. The efficiency, organisation and machinery meant that women were more able to farm the land on their own, which meant that peasant men left their farms and went to work in the industrial labour sector. In conclusion, Stalin was successful in modernising Russia somewhat before 1941. According to Stalin, industrialisation and collectivisation were successful because they were able to rid themselves of the kulaks and move towards communism. The state could now exercise more control over the peasants with the collectives, and over the workers through strict demands and harsh punishments. Even though the consumer goods, housing and textiles industry were in decline, the USSR had advanced industrially, economically and agriculturally, and had moved further towards a socialist state. Bethany Brookhouse Bethany Brookhouse ...read more.