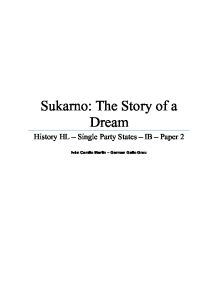 Indonesian History. Sukarno was not only the first president of Indonesia; he was a savior, an inspiration.

Sukarno: The Story of a Dream History HL - Single Party States - IB - Paper 2 Iv�n Camilo Martin - German Gallo Grau Unifying people of such differing ethnic, cultural and religious backgrounds without shedding a drop of blood was no small achievement, nor was the fact he was able to make the Indonesian people feel proud of their homeland after 350 years of Dutch colonial rule and three-and-a-half years of Japanese occupation. Sukarno, the brother or father of the nation, the one who proclaimed independence for his land, the leader of his homeland, the one who gave unity to Indonesia, dignity to the downtrodden and anxiety to the powerful, who finally brought him down. He once proclaimed that Independence could only be obtained and secured by a nation that had its spirit raging with determination, objective he surely accomplished thanks to his oratory, which could move crowds. Sukarno was not only the first president of Indonesia; he was a savior, an inspiration. Born in East Java in the Dutch East Indies on June 6, 1901, under a minor aristocrat family with acceptable conditions, Sukarno was raised under academic rigorousness. ...read more.

Immediately after the Japanese Government surrender to the Allied forces of the Second World War, Sukarno and Muhammad Hatta declared the independence of Indonesia on August 17th (Whatkins). Even though Sukarno's strong opposition to the Dutch occupation in Indonesia was remarked internationally, he didn't opposed to imperialism as a whole, he only opposed to the Javanese being the victim of it, as it could be justified by his declarations along with other nationalists that insisted that the new nation would include all the territories conquered by the Dutch, even taking into account those that had no cultural affiliation with the Javanese or the Malay peoples. After the sudden return of the Dutch to the islands and the constant battles against them, Indonesia was officially free to function after the Netherland's withdrawal, thanks to the ultimatum the American government gave to them of retiring the Marshall Plan in their territory if they didn't disengage from their attempt to recolonize Indonesia. The threaten by the United States of America was the result of the prove Sukarno showed to correctly identify them as non-communists based on the events in Madium, disclaimed by the Siliwangi Division under Nasution (Annanta, 1999). ...read more.

Perhaps Sukarno's commitment to democracy was the reason why he reorganized all of these parties into 11 as a political necessity, all of which retained their independence and dismantled free enterprise. Economics was not Sukarno's forte; he was a miserable failure at financial policy. He spent the limited funds Indonesia had for the reconstruction of infrastructure in private luxuries for himself and his family. Indonesia was not meeting its food needs and shortages were becoming serious, as a consequence the government started printing economic resources and inflation began to surge into the hyperinflation rage (Whatkins). Sukarno's critics may have called him a dictator, yet they never expected his removal in 1966 in a shadowy coup by a true totalitarian character, that of Suharto. The father of land died in 1970, a man whose dreams of a free, socialist and peaceful Indonesia were hijacked by a violent and stifling military rule. The "century of the awakening of the colored peoples" came to an end. As Suharto came to power free enterprise was reestablished, censorship and the centralization or control of the power increased, the use of violence raised and Indonesia's expectative under the frame of national pride suddenly vanished. ...read more.