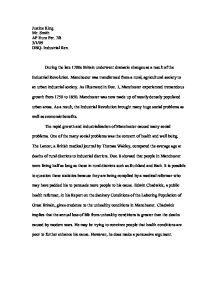 Justine King Mr. Smith AP Euro Per. 7/8 3/1/09 DBQ- Industrial Rev. During the late 1700s Britain underwent dramatic changes as a result of the Industrial Revolution. Manchester was transformed from a rural, agricultural society to an urban industrial society. As illustrated in Doc. 1, Manchester experienced tremendous growth from 1750 to 1850. Manchester was now made up of mostly densely populated urban areas. As a result, the Industrial Revolution brought many huge social problems as well as economic benefits. The rapid growth and industrialization of Manchester caused many social problems. One of the many social problems was the concern of health and well being. The Lancet, a British medical journal by Thomas Wakley, compared the average age at deaths of rural districts to industrial districts. Doc. 8 showed that people in Manchester were living half as long as those in rural districts such as Ruthland and Bath. It is possible to question these statistics because they are being complied by a medical reformer who may have padded his to persuade more people to his cause. ...read more.

In doc. 2, Robert Southey, an English romantic poet felt that the city was filled with narrow streets and blackened with smoke that had no beauty. Also in doc. 4, Francis Anne Kemble, a poet and dramatist who seems to support Southey felt a "dangerous spirit of discontent among the grim and grimy crowd". Both documents are from artists who as romanticists would have loved nature and despised industrialization so their opinions could be questioned. Their opinions are supported by two foreign visitors from France. Alexis de Tocqueville and Flora Tristan, a French socialist and women's right advocate both found evidence of filthy sewers and physical suffering and moral degradation. (Docs. 5 and 7) Their opinions could be questioned because of intense rivalry between these countries, the two visitors are from France and possibly hard feelings between Tocqueville and Tristan. Although the social issues raised by the growth of Manchester were seen in a majority of the documents, there were some who saw the economic benefits from this rapid industrialization. ...read more.

Another, positive view on the growth of Manchester is seen in doc. 10. William Alexander Abram, a journalist and historian wrote in 1868 that the industrialization of Manchester benefited the people because it provided public parks, libraries, happiness and culture. He also suggests that sickness and morality have been reduced incredibly. Abram is writing after many social reforms have taken place such as the Factory Act in 1833. The Factory Act limited the factory workday for children 9 to 13 to 8 hours and 14 to 18 to 12 hours. There were many social problems and economic benefits caused by the rapid growth and industrialization of Manchester. Some social problems included health and well being. People died early due to unsafe working and living conditions. It appears that the Industrial Revolution was an overall benefit to Britain. Wages and living conditions did improve drastically over the one hundred years between 1750 and 1850. The industrialization of Great Britain allowed it to become a world leader and changed history of the world. ...read more.