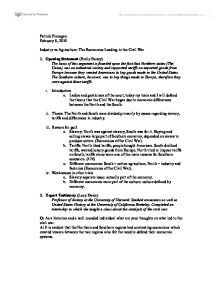 Industry vs Agriculture: The Economics Leading to the Civil War

Patrick Finnegan February 9, 2010 Industry vs Agriculture: The Economics Leading to the Civil War 1. Opening Statement (Emily Boney) The basis of this argument is founded upon the fact that Northern states (The Union) was an industrial society and supported tariffs on imported goods from Europe because they wanted Americans to buy goods made in the United States. The Southern culture, however, was to buy things made in Europe, therefore they were against these tariffs. i. Introduction a. Ladies and gentlemen of the court, today my team and I will defend the theory that the Civil War began due to economic differences between the North and the South. ii. Thesis: The North and South were divided primarily by issues regarding slavery, tariffs and differences in industry. iii. Reason for guilt a. Slavery: North was against slavery, South was for it. Buying and selling slaves large part of Southern economy, depended on slaves to produce cotton. (Economics of the Civil War) b. Tariffs: North liked tariffs, people bought American. South disliked tariffs, wanted luxury goods from Europe. North tried to impose tariffs on South, tariffs alone were one of the main reasons for Southern secession. (476) c. Different economies: South = cotton agriculture, North = industry and factories (Economics of the Civil War). iv. Weaknesses in other trials a. ...read more.

I do not expect the Union to be dissolved; I do not expect the house to fall; but I do expect that it will cease to be divided. It will become all the one thing or all the other" (Norton, Roger). Q: But why would a simple difference in economies trigger such a catastrophic war? A: The thing is to the people of this time the economic variations were something that could not be avoided or shoved in the background. As soon as they realized that they were on paths of creating a successful nation by different means they sought change through war. It troubled the South that the North was industrialized while they stayed in the farming era. By moving forward with industry and non-slave labor the North put out he message that they were against the South's way of maintaining a successful economy. When a states economy is threatened craziness pursues. Money meant everything to the Southern states so when the North was found to be more successful through means of industry the South was automatically against them (EH.Net Encyclopedia: Economics of the Civil War). Q: How did tariffs add to the economic differences that led to the war? A: First off, Tariffs created money for the government by creating taxes on imported goods. ...read more.

And in the nation's attempt to: establish or abolish slavery, regulate tariffs, and create industries that could coexist with one another, our nation became divided in a political and physical Civil War. Leading me to why we are gathered here today in this courtroom, I will no doubt find the economic differences of the Northern and Southern States guilty for causing the Civil War! 4. Cross-examination Questions i. Slavery- Slavery is a guilty cause to the civil war. However, do you agree that the Southern economies were formulated around slave labor, making the issue of slavery detrimental to the economy? ii. Culture- What defines culture? The jobs in an area bring and establish culture, the urban sprawl caused by the types of work found in the North and the South is the leading cause of the Civil War. iii. Election of Abe Lincoln- What was Abe Lincoln's platform that caused him to be elected? iv. State's Rights- "A house divided against itself cannot stand. I believe this government cannot endure permanently half slave and half free. I do not expect the Union to be dissolved; I do not expect the house to fall; but I do expect that it will cease to be divided. It will become all the one thing or all the other." Many politicians believed that federal rights preceded state's rights, in a nation that is defined by it's very economy, how can our determination to create a singularity reflect upon the state's rights? 5. ...read more.