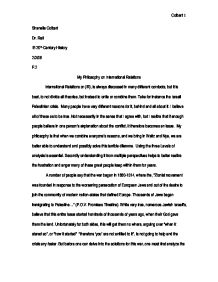 Shanelle Colbert Dr. Reti IB 20th Century History 2/3/08 P.2 My Philosophy on International Relations International Relations or (IR), is always discussed in many different conducts, but it is best, to not divide all theories, but instead to unite or combine them. Take for instance the Israeli Palestinian crisis. Many people have very different reasons for it, behind and all about it. I believe all of these as to be true. Not necessarily in the sense that I agree with, but I realize that if enough people believe in one person's explanation about the conflict, it therefore becomes an issue. My philosophy is that when we combine everyone's reasons, and we bring in Waltz and Nye, we are better able to understand and possibly solve this terrible dilemma. Using the three Levels of analysis is essential. Secondly understanding it from multiple perspectives helps to better realize the frustration and anger many of these great people keep within them for years. A number of people say that the war began in 1880-1914, where the, "Zionist movement was founded in response to the worsening persecution of European Jews and out of the desire to join the community of modern nation-states that defined Europe. ...read more.

Unfortunately, this is becoming more Liberal then Realist, simply because, as a Realist would argue that something like that wont ever happen. People are more isolated and passionate about their own personal aspirations, than others. A Liberal on the other hand would, bring a much lighter path to the whole situation, beginning with the first image. Firstly, they are much more optimistic about the Middle Eastern Crisis than a realist. They believe that there can be cooperation and that hearts are malleable; people can change and do what is best for peace. All the people in the Middle East are suffering from something, whether it is, heart ache, or anger, they are all suffering, and a Liberal certainly believes that here can be a way to change this. The people's pain and hardship won't exist; if they just try to change themselves, everyone else will do the same. The also believe that antidemocratic governments and dictatorships cause wars. Liberals know that if governments weren't dictatorial, the Middle East would have any conflicts and the people would be content. Governments that promote revolution also are a huge issue to the Liberal, they feel that these governments only lead to more conflicts and issues and that hey are pointless. ...read more.

It seems best if the Middle East did allow a democratic government to be set forth out there simply because it could bring peace a lot faster. While the Marxist's ideals were extreme, it is understandable to see why one would feel the only way to have peace is through violence or revolution. Unfortunately history has shown time and time again, that revolutions simply don't work, they only cause more conflict within the next generation to come. Once nations become communist, it's only rare that their communist societies work. This is where Wal-Mart comes into play. I think that maybe if the Middle East did establish a Wal-Mart, there might be more peaceful solutions. Simply because, Wal-Mart provides opportunities for Nations to work together, like China and the US. I just hope that there can soon be peace with in the Middle East, so that people can live in harmony, and without conflict. In conclusion, the problems within the Middle East can only be solved if we all combine all of our solutions together, except for Marxism, which much too radical. The first image is more important than the any of the other images, simply because it deals with the internal person. Because of this person, levels two and three are possibly. Without levels two and three though, the Nations would still get nowhere with out influence from the state and government. ...read more.