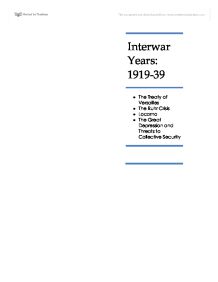 Interwar Years: 1919-39 * The Treaty of Versailles * The Ruhr Crisis * Locarno * The Great Depression and Threats to Collective Security THE TREATY OF VERSAILLES The "Diktat" * The German delegation was allowed no further say in the drawing up of the treaty after the terms were confirmed. However, they had no choice but to sign it, which they eventually did on June 28 1919. * The Germans attacked the treaty, calling it unfair on grounds of being a "diktat" or "dictated peace". * It was believed that the location and manner in which the signing ceremony was staged were designed to humiliate Germany, since the proclamation of the German Empire had occurred in the very same place in January 1871. The Terms Territory Lost * Alsace-Lorraine to France * West Prussia and Posen to Poland * North Schleswig to Denmark * Eupen and Malmedy to Belgium * Danzig had its port facilities given to Poland * The Saar was placed under the control of the League of Nations, with France controlling the mines. * Upper Silesia was partitioned with Poland receiving half the area and two thirds of the mines. Germans were particularly incensed by this. * Germany lost all of her colonies in Africa, China and the Pacific. * As a result of the treaty, around 8.5 million people who lived in Germany's seized territory lost their citizenship, despite being German speakers. * This contravened with the principle of national self-determination, which President Wilson strongly believed in. War Guilt and Reparations * Germany was forced to admit her guilt for starting the war, perceived in Germany to be inaccurate and unfair because it was believed that many countries shared responsibility for the outbreak of war, particularly Russia which had mobilised its forces before Germany had done. * 'War Guilt' involved accepting responsibility for the damage Germany had done to the countries she had attacked. ...read more.

* Hitler's Nazi Party, as well as the DNVP, campaigned against the Young Plan in Germany as they believed that Germany was not guilty for starting WWI and therefore should not pay reparations at all. However the Reichstag eventually approved the Young Plan in March 1930. * However the Wall Street Crash of 1929 and the resultant Great Depression meant that the Young Plan never really got off the ground. The Hoover Moratorium (1931) and Lausanne Conference (1932) * In 1931, a serious banking crisis occurred in Europe, with the collapse of a number of important banks. * President Hoover responded by proposing, in June 1931, a one-year moratorium on all war debt and reparation payments. * French opposition delayed international acceptance of the proposed Hoover Moratorium; the French suspected that if reparation payments were suspended, they were unlikely to recommence at the end of 1932. * French suspicions were to be proved correct because reparations were effectively abandoned in 1932, as a result of the Lausanne Conference (June-July 1932). * At Lausanne, it was decided that reparations should be suspended for three years with the bill reduced to a final payment of just 3 billion marks. * Indeed when Hitler came to power in 1933, he announced that Germany would pay no more in reparations. The Great Depression and Threats to Collective Security Background * The most important single factor in the collapse of the 'Spirit of Locarno' in the late 1920s was the impact of the Wall Street Crash in October 1929 and the ensuing Great Depression. * The Great Depression dislocated the international economic system and created huge unemployment and social distress. * In the USA, 25% of the labour force was unemployed by 1933; in Germany the unofficial figure for unemployment in 1932 had been put at 8 million. * One consequence of this crisis was that it undermined confidence both in the capitalist system and in parliamentary democracy. ...read more.

The USA's reluctance to confront the Japanese aggression * The USA's drift into isolationism was reflected by its failure to intervene when Japan invaded Manchuria in 1931 and it was only until 1941 that the USA was prepared to take a strong stand against escalating Japanese aggression in the Far East, when it embargoed oil exports to Japan. * A provisional and then full Neutrality Act in 1935 and 1937 respectively committed the US government to neutrality in the event of future wars between foreign countries. * The USA's reluctance to involve itself in international crises in the 1930s in part explains the weak stance taken by Britain and France in dealing with acts of aggression by Germany, Italy and Japan. The Arms Race * Growing threat posed to Britain and France by Italy, Germany and Japan led to them joining what became an international arms race like that seen in Europe before WWI. * Soviet rearmament started in earnest under Stalin in 1930 and, by 1936, the USSR had built nearly 16,000 planes and just under 19,000 tanks; rearmament accelerated even more rapidly from 1937 onwards under Stalin's Third Five-Year Plan. * Britain began serious rearmament in 1934, with a programme of military spending in the period up to 1938. * France commenced large-scale rearmament in 1936. * Hitler accelerated his rearmament of Germany sharply in 1936, with his Four Year Plan, designed to make Germany ready for war by 1940. * Both Japan and Italy substantially increased their military spending in 1938. Stalin's search for security in the 1930s * Faced by growing threats to the USSR, at a time when it was still far behind the West in terms of industrialisation, Stalin sought to increase Soviet security by ending the USSR's diplomatic isolation. * For much of the 1930s, Stalin looked to the West for 'collective security' against the threat posed by Hitler but eventually in 1939 Stalin did a complete U-turn and signed the Nazi-Soviet Pact. * Up until 1938, was Stalin looking to play off the western democracies against Germany. ...read more.