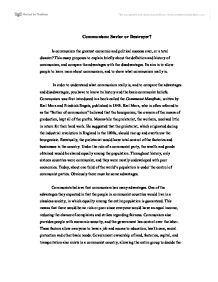 Is communism the greatest economic and political success ever, or a total disaster? This essay proposes to explain briefly about the definition and history of communism, and compare the advantages with the disadvantages.

Communism: Savior or Destroyer? Is communism the greatest economic and political success ever, or a total disaster? This essay proposes to explain briefly about the definition and history of communism, and compare the advantages with the disadvantages. Its aim is to allow people to learn more about communism, and to show what communism really is. In order to understand what communism really is, and to compare the advantages and disadvantages, you have to know its history and the basic communist beliefs. Communism was first introduced in a book called the Communist Manifesto, written by Karl Marx and Friedrich Engels, published in 1848. Karl Marx, who is often referred to as the "farther of communism" believed that the bourgeoisie, the owners of the means of production, kept all of the profits. Meanwhile the proletariat, the workers, received little in return for their hard work. He suggested that the proletariat, which originated during the industrial revolution in England in the 1800s, should rise up and overthrow the bourgeoisie. ...read more.

Government ownership of land, factories, capital, and transportation also exists in a communist country, allowing the entire group to decide the best ways to produce goods more efficiently. Joseph Stalin, the General Secretary of the Communist Party of the Soviet Union's Central Committee, started to use a series of five year plans in 1928 to try to industrialize the country. The result was that within twenty years, the Soviet Union transformed from one of the poorest and undeveloped countries in the world into a country that possessed the second largest industrial power in the world. This proved Marx's prediction that under a centrally planned economy, industrial and agricultural production would be a success. However, a centrally planned economy has also turned out to be very inefficient in many ways. Communism has also been shown to have many disadvantages when it is put into action. Since the factories and businesses in the entire country are controlled by only one group, the government, there is no competition from other groups or individuals. ...read more.

This is totally contrary to one of the main beliefs of communism: equality among the people. Due to the fact that almost all communists believe that violence is the only solution to bring about change, many innocent people have died during the revolutions, and many structures, machines, and technologies have been damaged or destroyed. In fact, nearly 55 million people were killed due to the various communist famines alone, and a total of 100 million men, women and children were killed due to communist related event! This essay has just taken a look at both the up and down sides of communism. Communism has played an important role in providing changes in many of the world's poor and undeveloped countries, making them some of the most powerful countries in the world as Karl Marx predicted. However millions of innocent lives have been lost due to events related to communism. This just leads to another question: Did communism really become what Karl Marx thought it would be, a saver of the proletariats, or did it just create a society full of unfairness, chaos, and blood? ?? ?? ?? ?? ...read more.