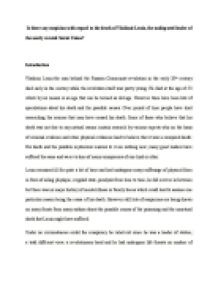 Is there any suspicion with regard to the death of Vladimir Lenin, the undisputed leader of the newly created Soviet Union?

﻿Is there any suspicion with regard to the death of Vladimir Lenin, the undisputed leader of the newly created Soviet Union? Introduction Vladimir Lenin-the man behind the Russian Communist revolution in the early 20th century died early in the century while the revolution itself was pretty young. He died at the age of 53 which by no means is an age that can be termed as old age. However there have been lots of speculations about his death and the possible causes. Over period of time people have tried researching the sources that may have caused his death. Some of those who believe that his death was not due to any natural reason contain research by various experts who on the basis of criminal evidence and other physical evidences lead to believe that it was a conspired death. His death and the possible mysterious reasons to it are nothing new; many great leaders have suffered the same and were victims of many conspiracies of one kind or other. Lenin remained ill for quite a bit of time and had undergone many sufferings of physical form in form of ailing physique, crippled state, paralysis from time to time, he did recover in between but there was no major history of mental illness or family traces which could lead to assume one particular reason being the cause of his death. ...read more.

Hence his verdict towards this claim does make a lot of sound in the corridors of evidence and suspicion on earlier claims. In his last days apart from the time where he was critically ill and could hardly move or talk, the times where he was able to respond and interact, were full of criticism for Stalin, he would come hard at his policies, his foreign relations, and other events and planning which certainly did not go well with Stalin by any means and as suggested by Trotsky, could have led to poisoning of the arch enemy Lenin. Trotsky?s contribution to list of evidences: A strong evidence of this can be extracted from the revelations made by Trotsky in his last days. While he himself had to reside in Mexico in his last days, he revealed that Stalin was the man behind Lenin?s death and it was executed in form of poisoning that was added to his meals. While Trotsky contributed a lot to the world of politics, Soviet Republic in particular and Socialist revolution as well, however his noticeable contribution can be traced in form of the revelation made in his last days of life. Which stirred the world and revealed the real relationship, the rivalry between the two greats of Socialist state and the possible personal enmity which resulted in the life termination of Vladimir Lenin. ...read more.

He defends his claim with the age factor, being the normal age, and secondly while he was physically ailing, he had no chronic diseases (Dominguez) as such which might have resulted in his possible death as such an age which is not all that dangerous(53). Conclusion: It is no mystery and no wonder that the great leaders and those who have been part of revolution occasionally are conspired after and at times killed through unnatural means. Lenin played a great role in the history of socialist revolution; he too potentially fell for conspiracy and was killed accordingly. Since so many people have come up with the claim of poisoning and unnatural death, this factor cannot be ruled out, while on medical front doctors claim this claim through evidences, on political grounds and evidence from those times can be best stretched back to the statement by Trotsky who was the first hand evidence to the entire episode and he is the possibly right person who told then what actually happened. The possibility of contribution to his death cannot be ruled out by any means, though it is not hundred percent evident through any solid evidence and science at that time was not as advanced as is in modern day, rather the assumptions and theories are based on traces, yet these traces are sufficiently strong to term this death as mysterious and probably caused by sources that may have resulted and contributed towards the death of already ailing man. ...read more.