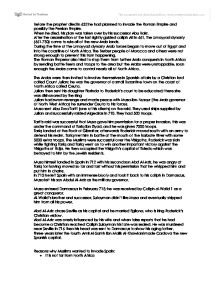 Islamic history - the invasion of Spain. Tariq landed at the Rock of Gibraltar, afterwards Roderick moved south with an army to defend his realm, Tariq met him in battle at the mouth of the Barbate River with some 5000 extra troops. The Muslims were succe

Before the prophet died in 632 he had planned to invade the Roman Empire and possibly the Persian Empire. When he died, his plan was taken over by his successor Abu Bakr. After the assassination of the last rightly guided caliph Ali in 661, the Umayyad dynasty (661-750) came to rule all of the new Arab lands. During the time of the Umayyad dynasty Arab forces began to move out of Egypt and into the coastline of North Africa. The Berber people of Morocco and others were not strong enough to prevent this from happening. The Roman Emperor also tried to stop them from further Arab conquests in North Africa by sending battle fleets and troops to the area but the Arabs were unstoppable, soon enough the Arabs came to control nearly all of North Africa. ...read more.

Musa sent Abu Zora Tariff (one of his clients) on the raid. They used ships supplied by Julian and successfully raided Algeciras in 710. They had 500 troops. Tariffs raid was successful that Musa gave him permission for a proper invasion, this was under the command of Tariq Ibn Ziyad, and he was given 7000 troops. Tariq landed at the Rock of Gibraltar, afterwards Roderick moved south with an army to defend his realm, Tariq met him in battle at the mouth of the Barbate River with some 5000 extra troops. The Muslims were successful over the Visigoths. Roderick was slain while fighting Tariq and Tariq went on to win another important victory against the Visigoths at Ecija. He then occupied the Visigoth's capital of Toledo which was betrayed to him by the Jewish residents. ...read more.

Abd Al-Aziz chose Seville as his capital and he married Egilona, who is king Roderick's Christian widow. Abd Al-Aziz was overly influenced by his wife and when false reports that he had become a Christian reached Caliph Sulayman his fate was sealed. He was murdered near Seville in 716 then his head was sent to Damascus to show his aging father. Three years later the fourth Amir Al-Samh Ibn Malik Al-Khawlani made Cordova the new Spanish capital. Reasons why Muslims wanted to invade Spain: * It is not far from North Africa * The climate is hot and dry in the south (which is the climate their used to) * by the 8th century the Romans did not appear to be interested in defending Spain * the governor of Spain was not strong * the Jews and other people would not fight for Roderick * Roderick's army was not strong. ...read more.