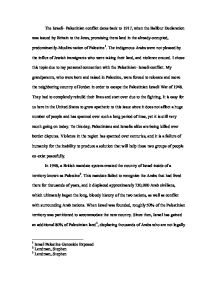 Israeli- Palestinian Conflict. I chose this topic due to my personal connection with the Palestinian- Israeli conflict. My grandparents, who were born and raised in Palestine, were forced to relocate and move the neighboring country of Jordan in order to

The Israeli- Palestinian conflict dates back to 1917, when the Balfour Declaration was issued by Britain to the Jews, promising them land in the already-occupied, predominantly-Muslim nation of Palestine1. The indigenous Arabs were not pleased by the influx of Jewish immigrants who were taking their land, and violence ensued. I chose this topic due to my personal connection with the Palestinian- Israeli conflict. My grandparents, who were born and raised in Palestine, were forced to relocate and move the neighboring country of Jordan in order to escape the Palestinian Israeli War of 1948. They had to completely rebuild their lives and start over due to the fighting. It is easy for us here in the United States to grow apathetic to this issue since it does not affect a huge number of people and has spanned over such a long period of time, yet it is still very much going on today. To this day, Palestinians and Israelis alike are being killed over border disputes. ...read more.

The U.S. is a strong ally of Israel, giving them approximately $3 billion in aid annually. The number often fluctuates; in 2005, the U.S. handed over $154 billion in weapons to the Jewish state, who currently boasts the sixth strongest military in the world5. This foreign aid has helped spur violence in the cities and towns of the West Bank and the Gaza strip, and have resulted in massive suffering and death for the Palestinian populations6. As billions of tax dollars are spent we should ask ourselves: What exactly is it we are funding? We are endorsing the continuation of violence, and "the humanitarian catastrophe that each day poses the entire 1.5 million Gazans to an unspeakable ordeal, to a struggle to survive in terms of their health"7 Also exacerbating the problem are Palestinian terrorist organizations, particularly Hamas and the Palestine Liberation Organization. Instead of trying to regain land and form an independent Palestinian state peacefully, they are resorting to terrorism and violence as means to achieve their political goals. ...read more.

As humanity continues to be idle - which is somewhat due to the deliberate media coverup of Israeli sponsored crimes and atrocities10--, thousands of Palestinians and Israelis continue to die annually. The genocide of Palestinian civilians has been going on for many years and the world has done nothing to stop it. Every single casualty that has resulted from this series of war is a reflection on the failure of humanity to be able to create a nation where two different groups are able to coexist peacefully. To this day, territorial disputes over the West Bank and the Gaza Strip are a source of violence and civilians suffer from atrocious living conditions in the region. It is a shame that innocent lives, Palestinian and Israeli alike, are continually shed over futile territorial disputes, and an even larger shame that the world has done nothing to stop it. 1 Israel Palestine Genocide Exposed 2 Lendman, Stephen 3 Lendman, Stephen 4 http://www.ifamericansknew.org/history/ 5 Chomsky, Noam 6 U.S. Aid to Israel 7 http://www.truthdig.com/report/item/20081215_israels_crime_against_humanity/ 8 Jewish Virtual Library 9 9 Civilian casualty figures for the Israeli-Palestinian conflict from B'tselem and Israel Ministry of Foreign Affairs 10 http://www.globalresearch.ca/index.php?context=va&aid=2787 ?? ?? ?? ?? ...read more.