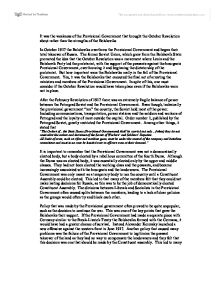 By association with Kerensky the Socialist Revolutionaries and the Mensheviks were discredited and their seemingly inability to change policy was condemned by the people Most of the moderate socialists now placed all their hope in the Constituent Assembly. However the Provisional Government failed to call the elections early enough. Many of the members of the Provisional Government, especially the liberals, knew they would not be favored in the elections for the Constituent Assembly so they tried to put off elections until the war ended and a more stable period came where they would be more favored. This let the Bolsheviks gain more and more popularity. When Kerensky moved against the Bolsheviks in the days leading up to the revolution he gave the Bolsheviks an excuse to seize power in the name of the Soviet. The Bolsheviks were the only party openly opposing the Provisional Government, calling for "all power to the Soviets" this earned them many supporters. One may say that the October revolution in one form or another would have happened even if the Bolsheviks had not been in place, this is probably the case. However, it is important to remember that there were some key figures in the Bolshevik party that held great influence over the events of 1917 such as Lenin and Trotsky. Had they not been where they were, the future of Russia could have look extremely different. ...read more.