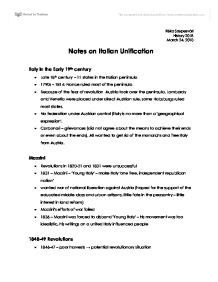 Notes on Italian Unification Italy in the Early 19th century * Late 18th century - 11 states in the Italian peninsula * 1790s - 1814: France ruled most of the peninsula * Because of the fear of revolution Austria took over the peninsula. Lombardy and Venetia were placed under direct Austrian rule, some Habsburgs ruled most states. * No federation under Austrian control (Italy is no more than a 'geographical expression'. * Carbonari - grievances (did not agree about the means to achieve their ends or even about the ends). All wanted to get rid of the monarchs and free Italy from Austria. Mazzini * Revolutions in 1820-21 and 1831 were unsuccessful * 1831 - Mazzini - 'Young Italy' - make Italy 'one free, independent republican nation' * wanted war of national liberation against Austria (hoped for the support of the educated middle class and urban artisans, little fate in the peasantry - little interest in land reform) * Mazzini's efforts of war failed * 1836 - Mazzini was forced to disband 'Young Italy' - his movement was too idealistic, his writings on a united Italy influenced people 1848-49 Revolutions * 1846-47 - poor harvests � potential revolutionary situation * 1848-49 revolutions - ...read more.

for union with Piedmont * 1860 - Cavour returned to power * Napoleon was now ready to accept Piedmontese expansion in central Italy * 1860 March - plebiscites - favoured annexation to Piedmont * Savoy and Nice - handed over to France * Northern and central Italy (except Venetia) - united under Victor Emmanuel * Cavour wanted to stop - Garibaldi had other ideas Garibaldi * initially supported Mazzini, then abandoned republican ideals, remained devoted to unity * inspired devotion among his men * practical: his achievements rested upon his actions rather than his thoughts * 1860 - revolt broke out in Sicily (King Francis was very conservative) * hoped to spark a nationalist uprising uniting Italy - asked Cavour's support - did not get it (Cavour thought it was not desirable, foreign governments might interfere it too much was done too quickly) * Emmanuel supported Garibaldi * 1860 May - sailed to Sicily in 2 old paddle steamers (did not have much chance to succeed) * won the Sicilian peasants support by promising land reform and tax reduction * won a surprise victory at Calatafimi * became 'dictator' * prepared to attack the mainland - feared that Cavour might prevent him using the ...read more.

behind unification * the Italy created in 1861 was not the Italy nationalists like Mazzini wanted * nationalism was a vital element (1859-60) National Society persuaded Italians they should support Piedmont * Mazzini, Cavour and Garibaldi had very different opinions but their interaction was crucial * Mazzini - provided the intellectual basis for nationalist movement and inspired some influential leaders (like Garibaldi). * Cavour - more important, once seen as an Italian nationalist whose every diplomatic manoeuvre was designed to promote unification, others say his chief concern was to extend Piedmontese power and to use the appeal of a united Italy as a means to this end. * Garibaldi - his contribution to unification was vital, his exploits made him a focal point for patriotic emotion, his conquest of the south in 1860 was a major element in the unification process. He could have been a dictator of southern Italy but believed in national unity to be more important than personal ambition. * Victor Emmanuel - often seen as lucky - he was at the right place at the right time. He appointed the right people (Cavour) who carried out his policies. ?? ?? ?? ?? R�ka Szepesv�ri History 20 IB March 24, 2010 ...read more.