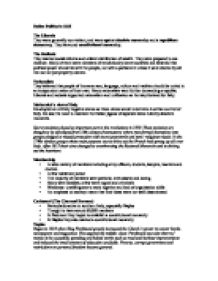 Italian Politics in 1815 The Liberals They were generally non-violent, and were against absolute monarchy and a republican democracy. They favoured constitutional monarchy. The Radicals They wanted social reforms and a fairer distribution of wealth. They were prepared to use violence. Many of them were members of revolutionary secret societies and believed that political power should lie with the people, not with a parliament unless it were elected by all men ad not just property owners. Nationalists They believed that people of the same race, language, culture and tradition should be united in an independent nation of their own. Many nationalists went further demanding a republic. Liberals and radicals supported nationalism and unification as the way forward for Italy. Metternich's view of Italy He adopted an entirely negative stance as these views would undermine Austrian control of Italy. He saw the need to maintain the Italian jigsaw of separate states rules by absolute monarchs. Secret societies played an important part in the revolutions in 1820. These societies are thought to be developed from 18th century freemasonry where men formed themselves into groups pledged to mutual protection with secret passwords and semi-religious rituals. In the 1790s similar groups whose main purpose was to drive out the French had sprung up all over Italy. After 1815 their aims changed to overthrowing the Restored Monarchs and to driving out the Austrians. Membership � A wide variety of members including army officers, students, lawyers, teachers and doctors. � A few noblemen joined � The majority of members were patriotic, enthusiastic and daring � Many were idealists, a few were rogues and criminals � Weakness: unwillingness to work together and lack of organisation skills � An emphasis on secrecy meant that their ideas were not well disseminated Carbonari (The Charcoal Burners) � Particularly active in southern Italy, especially Naples � Thought to have around 60,000 members � In Piedmont they hoped to establish a constitutional monarchy � In Naples they also wanted a constitutional monarchy Naples Began in 1818 when King Ferdinand greatly increased the Church's power to censor books, newspapers and magazines. ...read more.

Garibaldi, the military hero of the Roman Republic, saw Victor Emmanuel as the King of a united Italy. Victor Emmanuel, for his part, hoped to marry a policy of extending Piedmontese influence in Italy with the legitimising idea of nationalism. But after defeat in 1848-9 nationalist hopes and Piedmontese expansionist dreams seemed far from realisation. Piedmont attracted the hopes of liberals and nationalists after 1849 for several reasons � Alone among Italian states it possessed a constitution and a comparatively free press. � Piedmont had twice gone to war with Austria in 1848-49 � Piedmont was the most prosperous region of Italy � During the 1850s Piedmont attracted some 200,000 political refugees - liberals, nationalists and republicans - from other parts of Italy. This gave the state a cosmopolitan nationalist flavour. It also added to the nationalist pressure on the government. The National Society embodied the new nationalist drive for unification. The Statuto: March 1848 � The Statuto created a limited parliament. � The upper house was appointed by the King � The lower house was elected. � The king retained most of his existing rights. � Parliament had no direct control over government. � It was more important for ministers to have the king's support than a parliamentary majority. � Less than 3% of the population could vote. � But the Statuto offered a few wealthy citizens opportunities for political participation which were not possible elsewhere. The National Society � During the 1850s many Italians rejected the ideals of Mazzini. � The new direction which emerged was articulated and developed by Pallavicino, founder of the National Society which emerged in 1857. � Pallavicino invested his hopes for Italian unification in the Piedmontese monarchy. � The National Society attracted liberals, hardened revolutionaries like Garibaldi and ex-republicans like Daniele Manin, president of the 1848-49 Venetian Republic. � Although the Society had only a few thousand members, its influence was substantial. ...read more.

� There were deep political divisions between republicans, monarchists and federalists � There were serious economic divisions. � There was a huge financial deficit as a result of the wars and debts incurred in the 1850s. There was a need for new railways and roads. � Although most Italians shared a common religion, Catholicism could not play a part in making Italy given the Pope's hostility to the new state. � Rome and Venetia were still not part of the new kingdom. Piedmontisation � Italian unification had been a takeover by Piedmont. After 1860 the Piedmontese systems were extended to - indeed imposed - upon the rest of the country. � The King retained his Piedmontese title of Victor Emmanuel II - he did not become Victor Emmanuel I of Italy. The first Italian parliament, elected in 1861, met in Turin, capital of Piedmont. Centralised government, based in Piedmont, was established can carried out by Piedmontese civil servants, politicians and soldiers. � Italy adopted the Piedmontese constitution. It was thus far from democratic. Voting was restricted to literate and high tax-paying males over 25 years old - about 2% of the population. There were few ideological conflicts and no real political parties emerged. The leading politicans were those who were able to build broad coalitions by absorbing potential opponents into their faction through the promise of political favours. Most coalitions were short-lived: there were 28 of them between 1860 and 1892. � The governments appointed prefects to act as its local representatives in Italy's 53 provinces. Most were Piedmontese who often had little understanding of the places or people they were administering. � Piedmont's legal system became the basis of the Italian legal system. � The foreign and diplomatic services of the Italiy were based on those of Piedmont. � Land confiscated from the Church and from the Bourbons passed into the hands of north Italian businessmen who often exploited it more ruthlessly than their predecessors. � The introduction of Piedmontese external tariffs were often disastrous for the economies of other regions. ...read more.