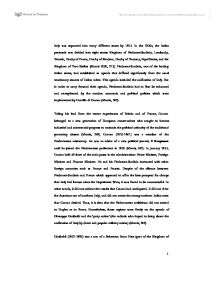 Italy was separated into many different states by 1815. In the 1850s, the Italian peninsula was divided into eight states: Kingdom of Piedmont-Sardinia, Lombardy, Venetia, Duchy of Parma, Duchy of Modena, Duchy of Tuscany, Papal States, and the Kingdom of Two Sicilies (Morris 2000, 375). Piedmont-Sardinia, one of the leading Italian states, had established an agenda that differed significantly from the usual reactionary stances of Italian rulers. This agenda included the unification of Italy. But in order to carry forward their agenda, Piedmont-Sardinia had to first be enhanced and strengthened by the modern economic and political policies which were implemented by Camillo di Cavour (Morris, 369). Taking his lead from the recent experiences of Britain and of France, Cavour belonged to a new generation of European conservatives who sought to harness industrial and commercial progress to maintain the political authority of the traditional governing classes (Morris, 369). Cavour (1810-1861) was a member of the Piedmontese aristocracy. He was an editor of a new political journal, Il Risorgimento until he joined the Piedmontese parliament in 1850 (Morris, 263). In January 1855, Cavour held all three of the main posts in the administration: Prime Minister, Foreign Minister and Finance Minister. He and his Piedmont-Sardinia interacted with other foreign countries such as France and Prussia. Despite of the alliance between Piedmont-Sardinia and France which appeared to offer the best prospect for change that Italy had known since the Napoleonic Wars, it was found to be unsuccessful. In other words, it did not achieve the results that Cavour had anticipated. It did not drive the Austrians out of northern Italy, and did not create the strong northern Italian state that Cavour desired. Thus, it is clear that the Piedmontese amibitions did not extend to Naples or to Rome. Nonetheless, those regions were firmly on the agenda of Giuseppe Garibaldi and the 'party action' (the radicals who hoped to bring about the unification of Italy by direct and popular military action) ...read more.

Thus, in the context of 1856, Cavour had failed to achieve a diplomatic initiative and had not created the conditions necessary for a military solution to the problem of the Austrian presence; thus the unification of Italy (Morris 373). Cavour's efforts to provoke Austria into war failed (Farmer, 18). In fact, Cavour had difficulties and failures in executing his goals. It is true that he was a well known, a skilled diplomat but nevertheless he had quite a few difficulties and failures in diplomacies that were linked to the Italian Unification: A cunning opportunist, Cavour was to play a major role in Italian unification. However, unification did not come about according to any carefully conceived plan on his part. Indeed, pre-1860 he did not conceive of the possibility of Italy as a unitary state" (Farmer, 18). This portrays the difficulties and confusions Cavour had towards the idea of unifying Italy. Another example of Cavour's failure is when his attempt to arrange a revolution in Naples in favor of Victor Emmanuel failed (Farmer, 19). Also, the Plombi�res agreement (July 1858 between Cavour and Napoleon III) whereby France was to receive Nice and Savoy as repayment for its military aid at the war of 1859, fighting against the Austrians (Morris, 374) was another failure (lost of public support) for Cavour. It had been ignored at Villafranca as France's undertaking to clear the Austrians from Lombardy and Venetia, remained unfulfilled, and due to Napoleon's lack of reaction towards the revolts in the Duchies. Nevertheless, it was resurrected in a Franco-Piedmontese agreement concluded in Turin in March 1860. It was decided that Savoy and Nice on the one hand, and Emilia and Tuscany on the other, should hold plebiscites to decide their future allegiances (Morris, 378). Thus, Cavour and his ministry handed over Nice and Savoy to France which raised a major cabinet revolt at that time. Cavour became very unpopular among the Italians. ...read more.

I'm satisfied with what we've got, so long as we can reach Ancona" (Wilmot, 234). In addition, this proves how Cavour was not at all ambitious like Garibaldi. All in all, Cavour did not, like Mazzini and Garibaldi, believe in Italian Unification. (Wilmot, 232). Garibaldi's contribution to the cause of Italian unity was vital. His exploits made him a focal point for patriotic emotion. His conquest of the south in 1860, against all the odds, was a major element in the unification process. He could have established himself as dictator of southern Italy but believed national unity to be more important than personal ambition (Farmer, 20). But, he handed the south to King Victor Emmanuel. To be specific, it was: On 26 October Garibaldi saluted Victor Emmanuel as 'the first king of Italy' and handed over his conquests. Refusing titles and wealth, he retired to Caprera with a year's supply of macroni and little else (Farmer, 19). Garibaldi conquered the South for the good of Italy, the whole nation, and not for his own interests. His action clearly proves how he was a modest and unselfish minister who sacrificed himself in order to serve duties to Italy - he accomplished many goals that were necessary to unify Italy. In addition: Garibaldi was prepared to fight anywhere - in Lombardy against the Austrians in 1848 and 1849, in Rome against the French in 1849, and in Sicily and Naples against Bourbon rule in 1860. Cavour, however, envisaged only an enlarged Piedmont, which would include Lombardy and Venetia only. (Lee, 76). The Italian nationalist and soldier, Giuseppe Garibaldi (1807-82), was "perhaps the greatest, and certainly the most famous, of the new breed of 'Great Men'" (Riall, 41-42). He was considered as one of Italy's 'Great Men', and in addition "in terms of importance, originality and sheer renown, he may be the nineteenth - century's greatest of all 'Great Men'" (Riall, 47). This cements on the fact that Garibaldi was the greatest of all 'Great Men' in the 19th century, greater than Cavour, Napoleon III, Mazzini, and King Victor Emmanuel. ?? ?? ?? ?? 1 ...read more.